I’ve watched enough horror films to know that I keep coming back to them because of the adrenaline rush from having my morbid curiosities appeased. I want to see grisly ghouls and buckets of blood, and because I’m anticipating that stuff, I’m not shocked when they eventually appear. Aside from the odd jump scare, I don’t think I’ve ever been truly frightened by a horror film.

Know what does scare me? That scene in Pinocchio when Lampwick transforms into a donkey, or the soul-piercing gaze of the Catbus from My Neighbor Totoro. Why would anyone ever expect a colorful children’s film to feed the nightmare machine? Is the fear factor always intentional or does it simply manifest itself now and then?

I see this effect in videogames as well. All the Resident Evils, Silent Hills, and Fatal Frames can talk the talk, but it’s the unassuming ones that chill the marrow in my bones. Sometimes, these games are so unnerving that I find it difficult to continue playing. They’re wolves in sheep’s clothing, and I curse the developers who are conscious of how their design choices would affect children (or children-at-heart).

And so, in the spirit of Halloween, I give you a list of eight non-horror videogames that have personally sent me on clean-underwear runs.

Having mastered Super Mario 64, I thought I knew what I was getting into with Rare’s first foray into 3D platforming. In truth, I was not prepared at all.

If Super Mario 64 is like an enclosed children’s park, Banjo-Kazooie is like Yosemite National. The sheer scope is enough to give someone like me a panic attack. I’m not a multitasker; I become confused if someone asks a favor while I’m in the middle of performing one for someone else. Hell, I get flustered just by searching for a movie to watch on my Netflix streaming queue! Now I have to collect what and go where then do what and help whom?

Banjo-Kazooie also introduced me to Rare’s special brand of anthropomorphism: slapping a pair of googly eyes on everything. At least the furniture in Beauty and the Beast had warm, inviting facial features and actual limbs (or approximations thereof). The objects in this game, however, have no distinguishing features other those cold, intimidating eyes and that unnatural swagger. There’s even a living toilet! God, I’m still haunted by Mr. Toilet Man from Look Who’s Talking Too!

And then there’s Clanker’s Cavern. 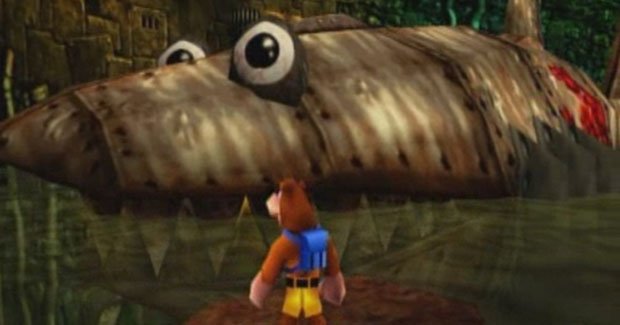 Well, I think I’m done with this level! Am I done here? Yeah, I’m done here! I’ll be whimpering softly in the corner if you need me.

I hate creepy crawlies in my house, but I reserve a special brand of hate for ants — ants in the bathroom, ants in the kitchen, ants mucking about in my Froot Loops. Seeing them emerge from every hairline fissure and potentially setting camp in my every orifice is the reason why I sleep with one eye open. Whenever I notice one of their highways running the length of the counter, I immediately reach for a bottle of Windex and furiously scrub out their transit line.

Deadly Creatures may not star an ensemble of my six-legged nemeses, but it does shrink me down and drop me in their universe. That just might be even worse. 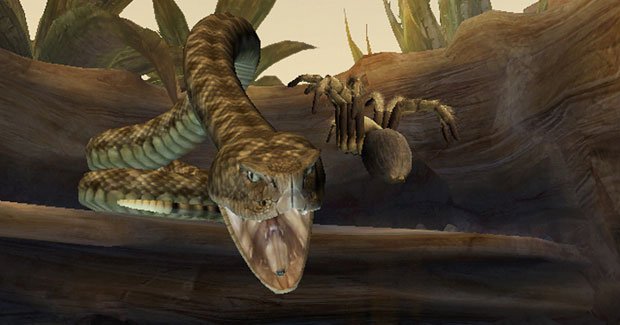 This is no charming and whimsical A Bug’s Life romp. Not only do you take control of a scorpion and a tarantula, two critters that most people would do their best to avoid like syphilis, but you also tangle with an assortment of formerly small-scale pests magnified several times their normal size. You battle lizards, beetles, snakes, and rats — critters that are living in the bushes on your lawn. Knowing that these dangers exist just outside your front door would make anyone lock themselves inside and never leave the house again.

As long as you’re shacking up for the long haul, I’d suggest regrouting the cracks in all the rooms as an extra precaution.

Balloon Kid is the Game Boy sequel to Balloon Fight. While the original is straight-up dueling arcade action, the follow-up is a globetrotting quest to rescue your younger brother, who has been carried away by a multitude of balloons that he was fooling around with.

Your lifeline is a pair of balloons that whisk you across the sky. These aren’t made of any type of industrial-strength material. They aren’t even Mylar. They are regular ol’ latex balloons that could be popped by a stray pine needle. You have no parachute or other backup device to aid you when your flight is inevitably cut short. I’m not too comfortable trusting my airborne safety to party favors that can be anchored by bags of Sweet Tarts and Dubble Bubble. 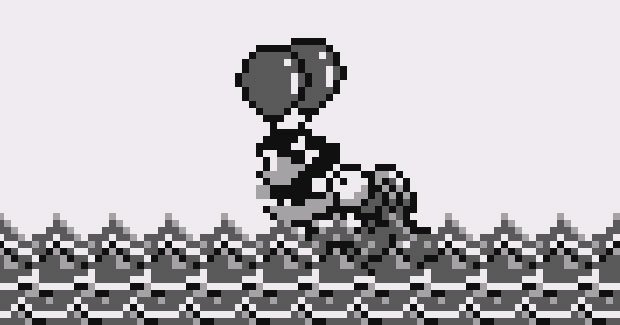 Keeping a low altitude presents its own set of hazards. Most of the time, your flight will carry you over bodies of water. But if you drop too low to the surface, a big-ass fish will pop out and swallow you whole. It’s Boss Bass from Super Mario Bros. 3 all over again!

This game is a double whammy for aviophobics and aquaphobics alike. Falling into a bottomless pit would probably be less nerve-wracking!

Imagine strolling into your local arcade (and these days, you really do need to use your imagination). In the corner, you spot a cabinet that’s running what appears to be a fast-paced version of Asteroids. You decide to give it a spin.

So you are flying around, blasting enemy fighters into dust and stocking up on bombs. Pretty standard shoot-’em-up fare. It’s pretty cool.

Then you hear that voice.

Something zips across the screen. What was that? Is that where the voice is coming from? Here it comes again. Oh God! What is that? You’re telling me to run? I’ll take that advice! AHHHHHHH!

What begins as a typical score attack becomes a deadly game of cat and mouse. Sinistar is the mechanical hell beast that pursues you relentlessly until it satisfies its appetite. Unless you have collected enough bombs to dismantle him, he’ll keep up the chase. All the while, his bone-chilling taunts repeat ad nauseum, made all the more terrifying by the hardware’s grainy sound system.

Sinistar was released in 1982. I’m not sure if there was any videogame prior that could accurately be classified as “horror,” so I doubt anyone would have expected a fright fest out of this. All I know is that this title shocked a lot of folks back in the ’80s, and nearly three decades later, it can still scare the piss out of me.

Majora’s Mask is a game in which you literally do not have time to save the world from impending doom. That persistent clock on the bottom of the screen is probably the greatest villain in all of gaming; the chiming of the clock tower as a new day dawns is a dreaded reminder that failure is racing towards you unrelentingly.

The game goes one step father and gives form to your destructor. Just as the Stay Puft Marshmallow Man in Ghostbusters was warped from its image as a harmless childhood mascot, the moon of Termina was warped from a romantic celestial body to a mass of gluttonous terror. Bestowed a ghastly visage and suspended miles above the planet’s surface, the moon can be viewed from nearly any location on the overworld. Looking up at the sky and seeing the moon glare down upon me, I feel less safe than I’ve ever been in any game before. 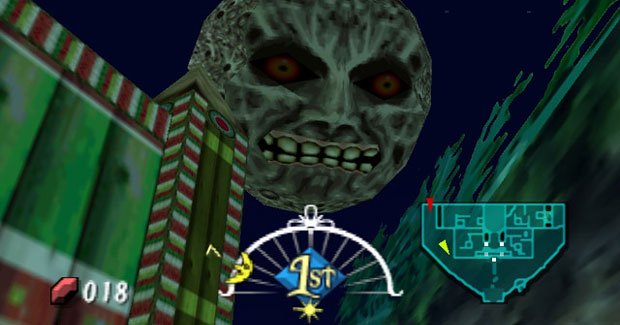 At first, the moon seems so distant, but with each passing day, it drifts closer and closer. On the final day, you can’t rotate the camera without getting an eyeful of that gaping maw, ready to devour you and all those around you. It’s a monster that can’t be killed or even touched. It’s just there, hanging off in space, slowly driving you mad.

What Jaws did for films, Ecco does for videogames a thousand times over. A game about a dolphin frolicking in the waves? More like a descent into a madness as deep as the ocean itself.

As a mammal, Ecco requires air to survive, but since your time is predominantly spent hundreds of feet below the surface, you must hunt for subterranean pockets and oxygen bubbles. When you think about it, you spend the entire game slowly drowning. 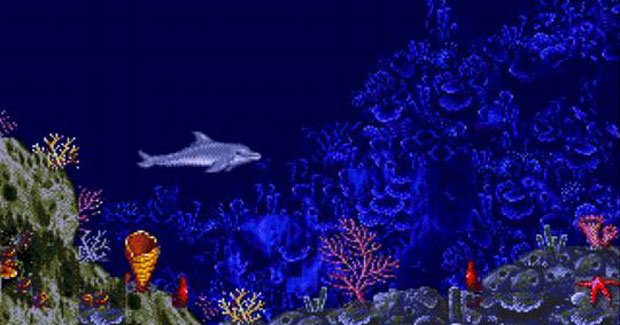 Once again, the vastness of the game world is overwhelming. The ocean is so vast that I don’t know how to begin. Coupled with the perpetual race for air, each level is like an aquatic sepulcher. Even if I could muster the nerve to seek and explore, why would I if death is only a few stolen breaths away? I can’t do it! It’s too much!

To this day, I’ve only been able to play the game with the infinite air cheat turned on. Even then, I couldn’t get far without chickening out and using a password to zoom right to the end. But that only brings me face to face with the Vortex Queen, and that’s another can of worms entirely.

I don’t understand why people say that Metroid games evoked a feeling of isolation. Many videogames star a lone protagonist battling wave after wave of enemy forces. Metroid doesn’t feel any different to me.

Which is what I would say if it were not for Metroid II.

All the shortcomings of the Game Boy hardware make this title far more atmospheric than its console brethren. The background is an inky canvas devoid of detail; the foreground tiles, luminescent formations devoid of hues. And because the Samus sprite is enlarged to be easily visible on the handheld screen, you get the sense that SR388 is a cavernous landscape with narrow tunnels that could squeeze the life out of you at any moment.

Aside from a few tunes here and there, Metroid II‘s soundtrack consists primarily of ambient noise. Without the distraction of a booming score, your mind begins to race. Where am I? What am I doing? Have I been abandoned? 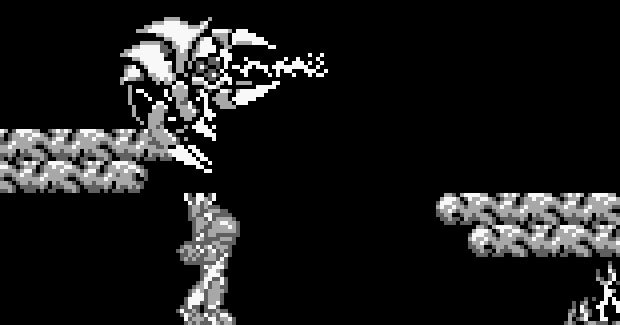 The primary targets in this game, the constantly evolving Metroids, are not waiting behind conspicuously marked chamber doors but scattered about and waiting in the dank corners. Usually, the only clue that a Metroid is in a room is a molted shell, and sometimes not even that. All of a sudden, a pulse-pounding, grating cacophony berates your ears, sparking panic and confusion as a Metroid springs from seemingly nowhere.

But the worst moment is the final confrontation against the Queen Metroid:

With every missile that connects, her speed increases and her shrill cries grow louder. Should the vicious barrage and piercing discordance become too much for you, your only relief is to roll out the emergency exit in the bottom left corner and start again. You see, in this battle, without warning, without mercy, the pause button has been disabled.