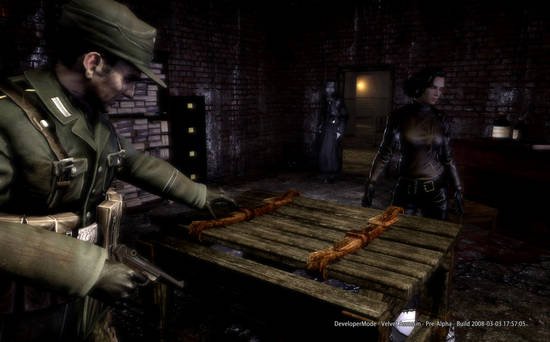 I suppose a dim, soggy cabin would be the best place to see Replay Studios’ Xbox 360 and PC title Velvet Assassin for the first time. The room is practically pitch black, and the game’s creative director, Sascha Jungnickel is leaning back nonchalantly in a metal chair as he prepares to demo an early version of the upcoming stealth action title.

“Even if this and the [game’s] missions are fictional,” Jungnickel tells us in his thick, Germanic accent, “they are really close to the person who inspired them.”

He refers to Violette Szabo, a British secret agent who served with the Special Operations Executive during World War II. Spoiler alert: in 1944, Szabo was captured by the Nazis, who tortured and executed her at the age of 23. Jungnickle is very clear up front – things don’t end well for Velvet Assassin’s protagonist, and that’s where the game starts.

The fictional Violette Summers is alone and dying in an abandoned hospital. The narrative is then told through flashbacks, and players will work their way through twelve missions that span across a number of European locales, France, Poland, and Germany among them. Jungnickle plays through one of these flashbacks today, which he tells us is in the pre-alpha stages, with many characters and animations not anywhere near final. 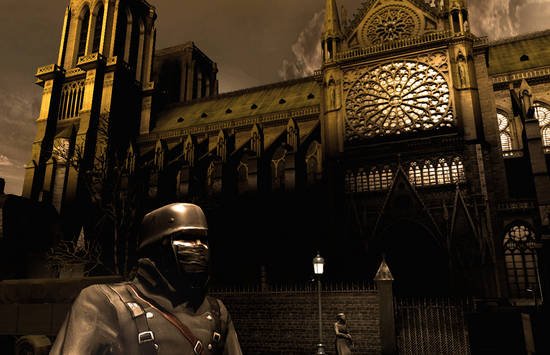 We see only one of these missions today, and while many of the game’s levels will take place in the beautiful locales of places like France during World War II, that’s not representative of what is being shown today. Like the game’s main character is inspired by reality, the mission we’re shown is also based on real events. This particular scenario is taking place in Poland in 1944 at a Gestapo prison, where British agents have been captured, are being tortured and made to spill their secrets. It’s Violette’s job to slip into the prison and deliver cyanide capsules to these agents, so that they may kill themselves to safely secure these secrets.

Jungnickel tells us about the game’s preceding mission, which involved cutting power to the prison so that Violette may sneak about unnoticed. Conveniently, the prison is running on emergency power, which helps to show off the game’s dynamic lighting. For a pre-alpha, it’s looking pretty great, with Violette’s character model casting shadows that are as impressive (if not more so) than the next-gen Splinter Cell titles. As with that series, cover in the darkness is just as important, and there’s even a “shadow” stealth meter in the game’s heads-up display. 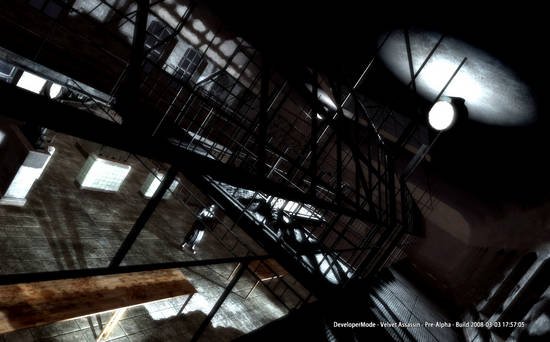 In one of the first rooms sits a bright, free-standing light. It illuminates the area ahead, making it impossible for Jungnickel to move ahead without being spotted. This is his chance to show us how Violette can manipulate the environment to her stealthy advantage; he approaches and slowly pushes a nearby crate in front of the light, which cloaks the area in darkness. This is only one example of environmental manipulation that he shows us – later in the demo, he’ll turn off a working radio to lure a guard to an appropriate spot for his death.

Velvet Assassin features between 50 and 60 different stealth killing moves. Jungnickel likens these deaths to Rockstar’s Manhunt, and it’s easy to see why. After sneaking behind the demo’s first enemy, Violette violently grabs and slits his throat before bending him backwards to stab him in the chest. These kills are not only upgradable throughout the game, but will differ depending on what weapon is being held.

The next room is a bit more problematic, with two enemy guards lurking about the shadows. Jungnickel attempts to stick to the shadows, playing it safe, but the guards spot him. At this point, he quickly slips into “Morphine Mode,” which stops time, giving him the chance to get the jump on his pursuers. The screen flares white, and what looks like rose petals flicker across the screen. During these sequences, Violette is wearing what looks to be a night gown; the idea, we’re led to believe, is that she is using morphine as she lays wounded in the abandoned hospital. These morphine-induced scenes are somehow part of her flashbacks, yet somehow still connected to reality. 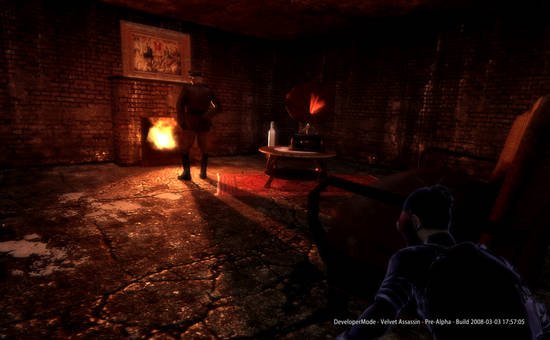 While the explanation for the “Morphine Mode” may be a bit convoluted, its implementation in the gameplay is not. It’s only available a few times per level (more when you’ve upgraded Violette) and should be used sparingly, and only when you need to safely remove yourself from a compromising situation. Using too much morphine, Jungnickel tells us, could result in an overdose situation which causes blurred vision and a potential fatality. Near-overdoses, however, can expose flashbacks and story information you wouldn’t otherwise be privy to.

But morphine is not the only way to get out of dangerous situations – Violette also has a number of weapons at her disposal. Jungnickel makes Violette pull out a shotgun, and fires it into a pack of enemies. I notice the sound is loud and dense, and the weapon does significant damage, dropping the guards with only a few shots.

“It’s not like in many sneaking games where, of course you should not use weapons,” Jungnickel says, “but when you use weapons it’s really boring. Like in Splinter Cell, [there’s] this ‘piff, piff’ sound and it’s really horrible. If a shootout [situation] arises, you should have the satisfaction. We’ve managed to make noisy, really cool weapons.”

Admittedly, stealth is not my forte; I like getting up close and getting dirty. But if Velvet Assassin can strike a good balance between stealth and action with its “noisy, really cool weapons,” it could make its way onto my “must play” list this year. If anything, stealth fans should keep their eye on Velvet Assassin, which should be slipping onto shelves in fall 2008.