This is not a mistake, and your eyes do not deceive you — this is the second Mushroom Men article you’ve seen on Destructoid today. The first was for Mushroom Men: The Spore Wars, the upcoming Wii title. What we’ve conned you into reading about now is Mushroom Men: Rise of the Fungi for the Nintendo DS. To recap: The Spore Wars is coming out on the Wii, and Rise of the Fungi is coming out on the DS. Really, it’s not that confusing, and I’m making a big stink out of nothing.

In fact, Mushroom Men: Rise of the Fungi is a significantly different game than the The Spore Wars. The DS version of Mushroom Men is not merely a port, but an entirely new title, designed by Red Fly Studio in collaboration with Budapest-based developer Zen Studios. Set as a prequel to The Spore Wars on the Wii, the DS title what Red Fly are calling a “2.5D” title – it’s 3D, but set in a side-scrolling platform environment (think Duke Nukem: The Manhattan Project or, if your brain allows you to remember it, Blowout).

So while both games have quite a bit in common (their back stories, for instance), the gameplay experience will be significantly different. We didn’t have a chance to go hands-on with the title (despite crying and throwing a pulled-pork sandwich at the developers), but a quick demo gave us a pretty good idea of what to expect when Mushroom Men: Rise of Fungi hits the Nintendo DS later this year.

Don’t make us toss our pulled-pork sandwiches at you — hit the jump for more details. 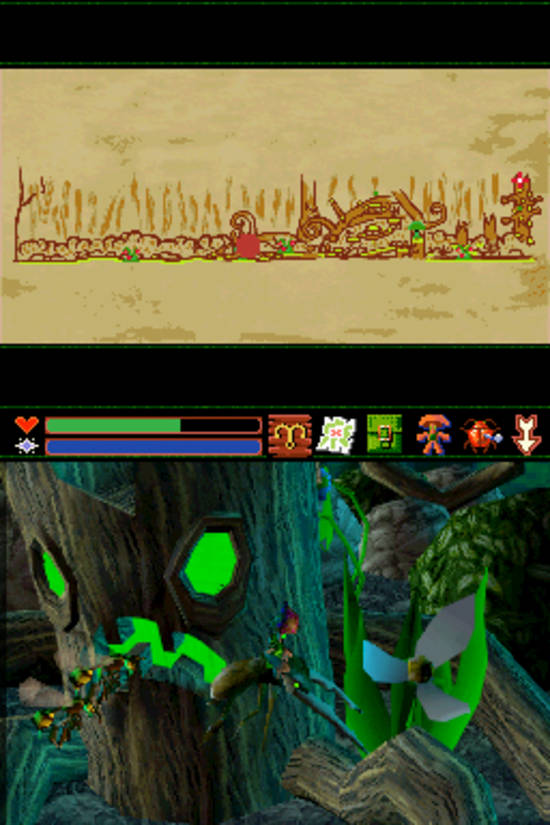 With Rise of the Fungi, the Mushroom Men story remains the same – a comet has passed over the Earth, leaving a mysterious blanket of green dust on the planet. Mushrooms, plants, and animal life are turned into more sentient beings, and there isn’t a single pulled-pork sandwiches safe. In the Nintendo DS version of Mushroom Men, players can take control of three different character types. The first is the “heavy,” your typical melee specialist; the “sage” is a spore power specialist; and the “scout” is an expert in ranged weapons. Each character has their own benefits and specific weaknesses, so players can tailor their experience to their particular playing style.

Red Fly are also making use of the handheld’s dual screens in an obvious, yet helpful way. Even though the handheld world of Mushroom Men is a somewhat linear, side-scrolling experience, each of the game’s ten levels (each with two “scenes” a piece) can be overwhelming. To remedy this, one screen will display a map, which can be seen at all times during play. Indicated on the map will be points of interest, noted by bouncing icons – objectives, save points, healing points, and more will always be visible. While the combat and platforming might pose a challenge, finding your way to spots of interest should never become a problem.

There will be plenty of combat in Rise of the Fungi, and a similar weapons system to that used in the Wii game is also found here. In what Red Fly are calling the “Scav” system (short for “scavenger,” brainiac), you’ll be able to find various pieces of trash to build weapons all across the game’s world. As they say, one man’s trash is a sentient mushroom’s gold, and you’ll be able to build a dozens of weapons using these parts. Different weapons will gain certain attributes, like incendiary or freezing. As you encounter enemies or bosses, a screen will be displayed showing you what resistances and weaknesses that particular baddie will have. Using this system, you’ll be able to modify your battles accordingly, and only by finding the right pieces of “junk” and assembling certain weapons will you be able topple the game’s tougher foes. 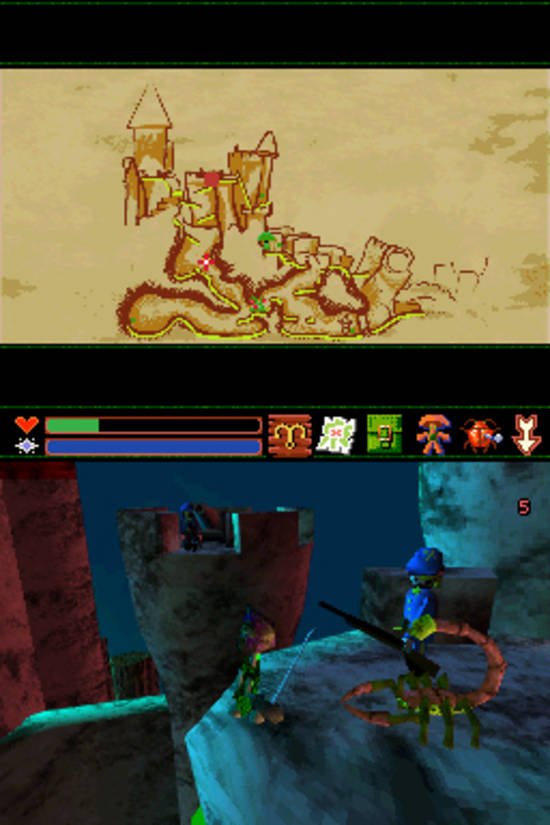 Unfortunately (like with the Wii game), we weren’t given a chance to hold the DS in our hands, so it’s hard to say how Rise of the Fungi will really play. We were told that a number of control schemes will be available, including settings for lefties, stylus heavy players, and even button/d-pad combinations for play. The idea here is to give players options, but if it’s any indication of what scheme you’ll be using, the player demoing the game was not using a DS stylus.

We also didn’t see the game’s cooperative mode in action, but were told that it would play a big role in the final game. Unfortunately, it doesn’t appear that Nintendo Wi-Fi will be utilized, and you’ll be relegated to local play only. When asked about DS/Wii connectivity between the two versions of the games, I was given a disappointing but firm “no.” It’s something Red Fly would have liked to have included, I was told, but there simply isn’t enough time (or resources) to make it happen.

Mushroom Men: Rise of the Fungi will be available exclusively on the Nintendo DS this fall.