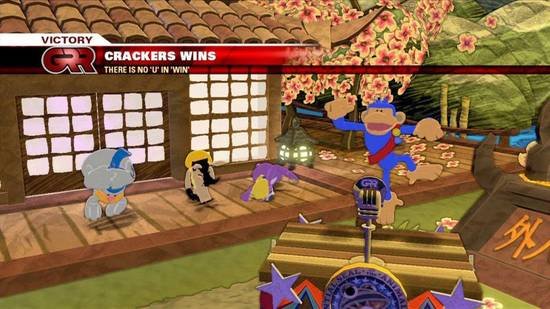 I think it’s safe to say that regardless of what game you’re playing, if a rollergirl is yelling “Kick his ass!” in your ear, it’s going to be a special experience.

That was how I spent my time at EIEIO while playing Wideload Games’ Hail to the Chimp, the upcoming multiplayer-focused party game for the PlayStation 3 and Xbox 360. In a small outdoor patio area on the main floor of Stubb’s Bar-B-Q in Austin, I spent about twenty-minutes battling other gaming journalists for clams … to the soothing sounds of hollering rollergirls.

“F**k ‘em up, Murgatoyd, f**k ‘em up!” an excited crew of rollergirls rooted from behind me.

The rollergirls were just getting into the spirit, backing their favorite Hail to the Chimp candidate, a pink jellyfish that garbles speeches and swats at opponents with her tentacles. While most party games don’t need a premise (can someone explain to me what’s happening in any of the 18 versions of Mario Party?), Hail to the Chimp has a narrative in place to hold it together. The king of the animal kingdom, the Lion, has been dethroned, and ten animals battle it out to gain votes (clams) to become the new ruler of the animal kingdom. 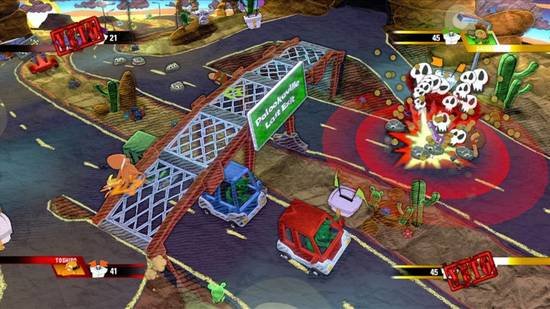 Hail to the Chimp will feature 16 different mini-games (which can be played across 10 different maps), and will support up to four players. Truth be told, I can’t imagine anyone wanting to play with less than four players – the action is hectic and out of control, with what seems like a million things on at the same time. The environment reacts and changes (a gigantic squid tentacle caused trouble in one level), and everything is highly animated, which may cause confusion of eventually seizures.

I went hands on with two game types, “Front Runner” and “Hack the Vote.” Each mini-game can essentially boil down to the same thing, which is collecting the most clams and then winning, and “Front Runner” is a great example of this. The simple idea is to run around the game screen collecting clams; the player with the most clams will wear the “crown.” Like a game of “king of the hill,” each player must maintain the crown for two minutes to win. Players can attack one another to release and reduce their opponents clam count, so running around and attacking others is the name of the game here. 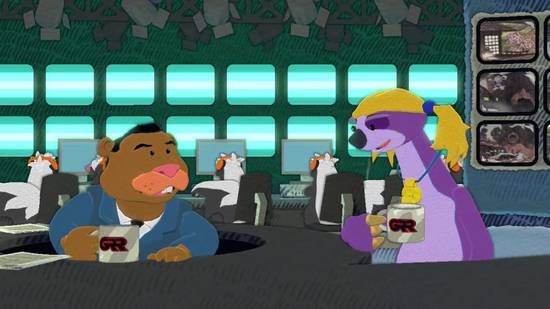 It was also in this mode that I saw the game’s “team-up” maneuvers, which prompted shouts of “Team-up!” in my ear. By pressing a single button, two players can form a temporary alliance to cause havoc on their opponents. Team-up moves will be different depending on the animal combination; teaming up with Toshiro, the game’s Japanese octopus, will allow you to create a clothesline that both players control. Another team-up had one player moving about, with the other player firing projectiles at opponents. The alliance can be broken at any time, and it’s particularly fun to then turn immediately turn on former “running mate.”

“Hack the Vote” was just as hectic and fast-paced as “Front Runner.” In this game, voting machines fall from the sky, and you’ll have to destroy each one to earn 1,000 points. Since it takes a few attacks to destroy each ballot machine, it’s not uncommon to see a few (or four) players fighting for control in one area. Here, the rules are as simple as could be — the player with the most points wins.

Hail to the Chimp has a simple, yet hilarious presentation. Written in part by writers for the hilarious parody newspaper, The Onion, the dialogue and situations seen in some of the cut-scenes are quite clever. While the game pokes fun at politics, it doesn’t do so at the expense of specific candidates. Instead, the focus is on the electoral process and the sometimes circus-like campaigning practices. The game’s animated cut-scenes can be viewed from an in-game menu, and watching them was just as fun as playing the actual game … which could be a problem if the game doesn’t stand up after a few hours of gameplay. 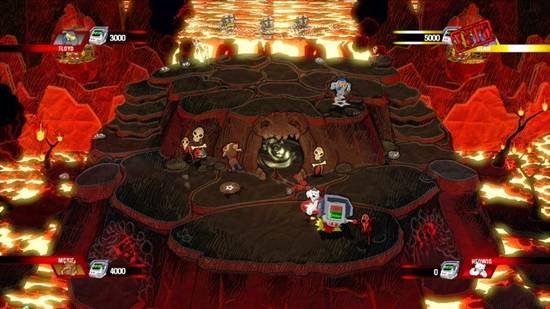 Still, at $39.99, Hail to the Chimp looks like it could be a fun party game for the price of admission. The game’s hectic, over-the-top gameplay reminded me a bit of the original Fuzion Frenzy, which (unlike the sequel) was actual quite a bit of fun in a group. It’s disappointing that there will only be 16 mini-games available though, and Wideload president Thomas Kang tells me there are no plans for additional downloadable content. Still, being able to mix and match different game types with the multiple maps could keep things fresh and fun.

Now the real question remains: where does one find rowdy rollergirls for their parties?