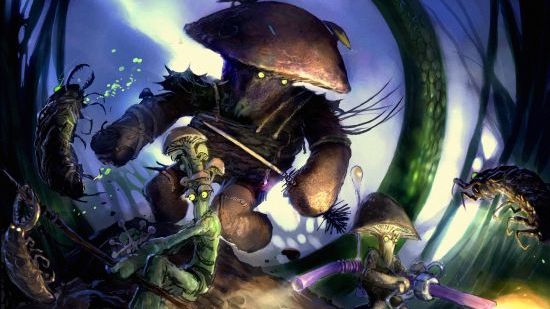 We haven’t seen a whole lot of the mysterious Mushroom Wars – The Spore War game yet, and that’s because Red Fly Studios has only been working on their adventure game for four months so far. While it might still be in the early stages of development, its creative art style has made its focus clear from the very beginning of its design.

Frank Teran’s dark and detailed concept art below shows how imaginative the team has been in designing their critter-sized creations. They’ve explored each and every inch above and below the ground to give us some of the most intriguing landscapes I’ve ever seen. I’ve lost count of how many impressive sunsets on high-poly horizons I’ve seen in other games, but they just don’t seem to compare to the charm of mushroom men running through mole caves riddled with waving worms and gila monster mounts.

You can check out some of the concept art below, and hit the jump for more story and gameplay details of what might be one of the best Wii games of 2008 if it can meet all its ambitious goals.

Mushroom Wars tells the tale of a battle for survival between edible and non-edible mushrooms (as well as bizarre looking cacti) living outdoors, who have come to conscious life thanks to a comet bringing foreign fungi to Earth. The backyard brawl, that the humans are oblivious to, starts with the DS version that allows you to play as one of three possible main characters: the primitive Boletes, the aggressive Amanitas, and the inventive Morels. Whereas the Wii version focuses on the fueding fungi more with only one playable main character. Ryan Mattson said that each version offers a complete journey through the story, although the Wii version also offers co-op gameplay that speeds up the pace of the game.

There’s over ten levels filled with hostile mushrooms, as well as spiders, scorpions, praying mantises, and other dirt thriving demons who have no problem with eating you whether you’re edible or not. Since the game’s still in its early stages gameplay wasn’t offered yet, but I got to see a slideshow that spanned several levels in the game, some of which you can see in the pictures below. Using the mysterious cosmic spores as magic, Red Fly Studios has created a scavenger-based item design system that lets you hunt down human debris to create several creative weapons. This setup can transform trashy soup can lids into shields, corn on the cob spikes into axes, and plenty of other thought provoking items. The environments are just as inventive, taking you down subterranean railroads made of laundry clothespins that weave around the ceiling spires of a carrot garden above.

As if all this wasn’t enough work, Red Fly Studios is also play testing eight different sets of ambitious Wiimote controls to make the game even more visually rewarding, with promises that it won’t just be a Twilight Princess “shake your sword around” combat system. Other than the high-poly character models they showed, the game’s graphics are still overly simple with lots of texture work left to finish. They’re expecting to release both games in the Fall of 2008, and if they can achieve the majority of their goals then we might be looking at a Wii game of the year candidate from a completely new company in the industry.