While a good portion of team Destructoid enjoyed the E3 festivities, Haley, Fronz and I got to hang out with the good folks at Gamecock. One of the first games I had a chance to see was Legendary: The Box by Spark Unlimited. The demo we were shown wasn’t very long, but did show off a lot of potential. That potential being aided by the Unreal 3 engine.

Hit the jump for my impressions of Legendary, a game that could easily be one of the biggest games of 2008.

Me and a few other gaming journalists were packed in a small room at the Hotel California with a two of the developers from Spark. Before the demo began, one of the developers gave us a brief history of the company. I was pleasantly surprised to hear that the team had worked on the Medal of Honor franchise as well as the first Call of Duty game. After so many World War II games, the team really wanted to move on to something different and unique.

The demo starts off with main character and professional thief Deckard; who was hired to steal a new artifact at the New York museum. Of course, what he doesn’t know is that this is Pandora’s Box and he is tricked into opening it. After Deckard opens the box, a symbol is scorched into his hand and the museum starts getting torn apart by the energy of Pandora’s Box. 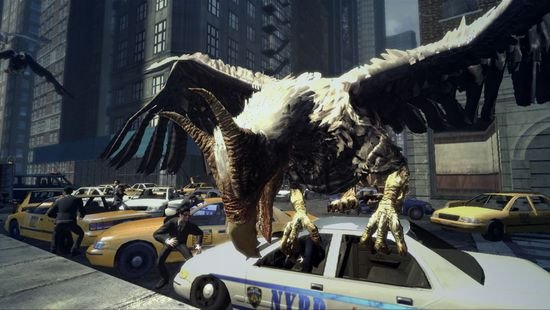 At this point, Deckard is now playable and is being lead out of the museum. People are running all over the place trying to get out as the building crumbles before Deckard. Just before you get outside, a giant beam of energy bursts from the ground from Pandora’s Box into the sky. As soon as you’re on the steps of the museum, a cut scene takes place showing the streets of New York shake with violence and all the surrounding buildings windows burst. That’s when the Gryphons, hundreds of them, seemingly show up out of nowhere. What Deckard has just done is unless all of the creatures that were once thought to be mythical and never real, come out of the Box from a one-thousand year rest.

The Gryphon’s are the size of elephants and immediately attack anything that moves. As Deckard is once again playable, we are told that the enemy A.I. is like nothing we’ve seen before. As you’re running through the streets of New York, Deckard is taken into a building where a Gryphon is trying to eat you. The Gryphon can’t follow you through the door so it makes its way to one of the windows and bursts it head through snapping its beck at you. The A.I. will know where a window is and know in order to get to you, it will need to break the window. As you make your way through the building the Gryphon follows you from the outside continuing it’s window smashing for a piece of your flesh. Finally, you get to a door and at that point, the Gryphon finds an easier target to eat.

After a few more minutes of running the streets of New York, a new creature appears. Well, a new creature is made right before your eyes actually. Rubble and cars start flying up into the air and form a gigantic Golem. Think Shadow of the Colossus Golem in terms of size and what not. This section of the demo ends with the Gollum taking a step on you.

The second part of the demo takes place in the second setting of the game, London. Opening the box is a world-changing event; nowhere is safe from the creatures of the Box. The people that hired Deckard in the first place are an ancient group that wants the power of Pandora’s Box to take over the world. Of course, with any story like this, there’s always the ancient group that have protected Pandora’s Box and have tried to hide it from the world. At this stage of the game, you have meet up with the group that wants to bring peace back to the world. We also learn that Deckard is the only person who can reseal the Box. 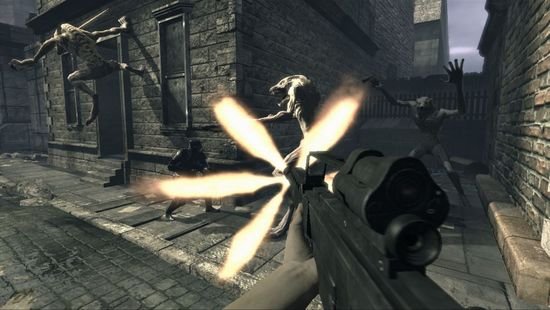 Deckard and the group in this level storm a building as they try to take out the opposing group. This is where we see the mechanics of the gun system as well just how strong the A.I. will be. It begins as a simple firefight between both sides. You’re storming the place so the enemy is already well established. There’s a group in front of you as well as a guy on a chain gun above you. About a couple of minutes go by during this when all of a sudden the Werewolves start coming out of the wood works. Deckard immediately switches from the Assault Rifle he was using to the Shotgun for the Werewolves. As the action is taking place, we are told that having specific weapons will be a very important part of the game. Sure, you can use the AR to take out the Werewolves … eventually. It makes it hard though with them running right up to your face and clawing at you. The wolves can also force you to the ground where it turns into a God of War mini game were you have to repeatedly press a button otherwise you’ll get your face chomped off. The shotgun in this case will save you a headache though. Especially with blowing of their heads, which you have to do. Otherwise, they will come back from the dead and go right back at you.

After the floor was cleared, you have to make your way up some stairs to the next section. This is where it’s really made clear how the A.I. will work. One of the Werewolves is coming straight at you while another wolf clings to the side of a wall and starts coming at your from a different angle. The A.I. will know that if one of it’s buddies is heading straight on for Deckard, the other A.I. will figure out another route to try and get to you. We are also shown one of the first powers Deckard can use that he got from Pandora’s Box. After you kill an enemy, it starts to disintegrate into the air. While that’s happening, you can siphon the corpse and recover some lost health. 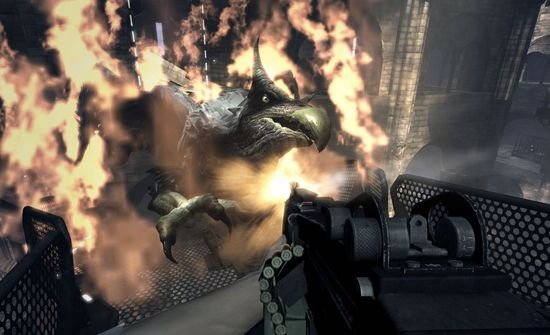 After Deckard makes his way to the top, more baddies with guns attack you. Your team has pretty much been destroyed at this point with a few small groups fighting in a different area. As the human enemies start to dwindle from your guns and Molotov cocktails, a variation of the Werewolves start to make their way in. They’re a lot weaker than the Werewolves, but what they lack in power, they make up in numbers. So as you see a horde of these new Werewolves running up the walls, ceiling and swinging from the chandeliers, you do the only logical thing at the moment. Grab the f*cking Chain gun. It’s a very powerful weapon, but to quote one of the developers, “It’s a bitch to reload”. As this new battle is taking place, a Gryphon bursts through one of the windows and guns it straight to you. Most of the battle was taking place on a small bridge in the building so of course the Gryphon is going to land on the bridge and break it with it’s weight. The Chain Gun is doing very little damage to the Gryphon as it hangs on to what’s left of the bridge. Of course, just when the action was getting really good, the demo ends right there with the Gryphon taking one good bite at you.

All in all, I felt very satisfied with what I had just seen. The game will be between 8-10 hours in length and should be out around Spring of 2008 for Xbox 360, PS3 and PC. When I asked them about the multiplayer aspect of the game, they were very cryptic. There will definitely be multiplayer, but they said it’s going to be very unique and something other games haven’t done before.