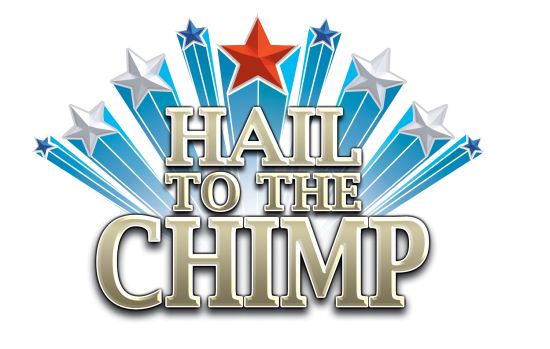 Today I got to join the cocky Haley and Hamsa at the Hotel California for a few rounds of Hail to the Chimp multiplayer on the Xbox 360. If you haven’t heard about this political petting zoo party game yet, the premise is simple: the lion is no longer the king of the animal world, leaving all the other species fighting for his throne. Wideload Games narrowed down the list of contenders to just ten fighters, although they said a sequel is possible if it gains enough popularity. It’s currently scheduled for a 360 and PS3 release in March, and with cel-shaded graphics and simple controls, it didn’t look far from finished already.

With ten characters to choose from and ten levels to play on, we played through a three round match that gave us a taste of a few different battle modes. The goal of the game is to gather the most clams, which represent democratic votes in the animal kingdom. In between each of the rounds this theme is held together by an animal television network that reports each player’s progress with Pixar-esque layered kiddy jokes tucked into its dialogue. I loved the style and setup, but its gameplay is what had me worried. Hit the jump for the round by round multiplayer walkthrough and full online details.

has been a dominant fighting series on the past few Nintendo consoles, and Hail to the Chimp is the first game on other consoles that compares to the upcoming Melee game in my eyes, although it comes with a catch. I’ve grown to love Smash Bros.’s fixed side-screen camera angle, and Wideload Games decided to change things up by shifting the fixed camera to a third person point of view. This opens a wide variety of new combat possibilities, although it also shrinks all the action and chaos on the screen dramatically, making the payoff of your combos less pleasing to watch. More on this later.

The first round was as simple as scrambling to collect the most clams in a certain time limit, while also avoiding the hazards on the factory floor in the center of the screen where the most clams spawn. Grabbing up the seafood votes isn’t enough to win though, you’ve also got to take them back to your drop station in one corner of the screen to unload the political points. Things get more interesting when the drop zones in the four designated player drop zones start to alternate to different corners of the screen. This is when the fighting starts to break out as paths cross, making combo use more important for moving around the screen successfully.

Each of the ten characters has its own unique combined attack move it can perform with another player. Instead of just attacking an opponent, Hail to the Chimp’s true strategy comes from these temporary double teaming rampages. My octopus that normally dealt small tentacle jabs could now hold hands with an opponent hippo to stretch my arms across the entire screen as a massive clothesline that toppled each of the other players in its path. However, to commit to a short-lived combo attack requires two different players to run up to one another and both hit the combo button instead of their normal attacking move. Trust is a hard thing to rely on in such a competitive game.

Half way through round one we’d shout out to others to team up with us to take down the leader of the match, but we ran the risk of having them betray us by attacking us while our guard was down. Furthermore, you can’t choose who to team up with – it’s whoever is next to you pressing the combo button. So by the end of round one we’d have two players try to team up on one person, who would run towards the danger instead of away, and then be able to reach one of the combo pressers before the other, thus stealing the triggered partnership and pivoting the pain to an surprised victim.

It was fun to explore what each player pair’s combo in the game was, and trying out all the different strategies involved with these teams definitely made gameplay more involved and reduced the amount of button mashing. Unfortunately, it also limited the pacing on certain levels that were more bare than others, with everyone repeatedly rushing towards each other, and then running away in fear after a combo was initiated. And when the combos were flying in all directions and the excitement peaked . . . you couldn’t really notice by looking at the screen.

Adding more particle effects and emphasis on animations wouldn’t solve the problem either – it’s the third person view that’s so damn limited to the game’s energy, making it feel like a game of fighting ants on screen at times. Not even God of War would be fun if Kratos was only a half inch blob on the screen across the room from you. So in this sense, its perspective allows for some really engaging battle strategies, but also hinders its desired effect to a degree.

The second round was even more competitive as the new battle mode had us racing to reach a certain number of clams before our opponents, and the third round introduced even more environmental hazards and teleport caves. This created hotspots on the map for you to create danger, then jump out of harm’s way through a cave, which forces another player to switch places with you. Just as in Smash Bros., the battle mode didn’t seem to dictate the amount of fun as much as the complexity of a level did. The more danger, the better.

To make multiplayer more entertaining, you can also save up additional clams to buy clothes for your characters online to customize your appearance. And if you’ve got no friends to play with then you can also play with one to three CPU players to practice or unlock more characters and levels in the career mode. Playing for more clothes instead of more trophies as in Smash Bros. is more exciting, but with only ten characters and ten levels to choose from, Hail to the Chimp can’t compete with Melee, although it’s definitely a great substitute to look into if you’ve got a 360 or PS3 and don’t on a Wii.