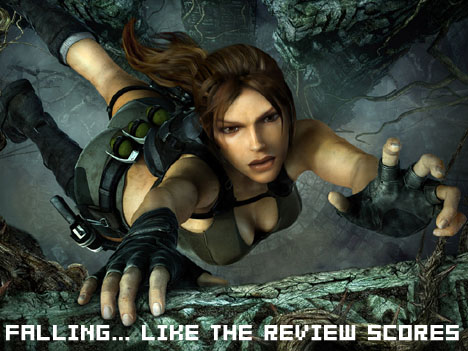 Ah, review control. What a seedy-ass business we’re in. I’m incredibly thankful to work for an outlet that does not give a f*ck what game makers and PR companies want us to do. We just do it, and we’re glad to see that other outlets aren’t following Eidos’ request to hold Tomb Raider Underworld reviews that are under a score of 8 out of 10 until next week.

Apparently British game outlets were asked to sit on those low scores to get Tomb Raider Underworld’s Metacritic score up. Word started to spread after Gamespot UK journo Guy Cocker dropped a tweet about this request.

What’s even crazier is that Eidos UK PR firm Barrington Harvey has totally confirmed this effort to control the score. Here’s the word from videogaming 247:

Said a Barrington Harvey rep on the phone this afternoon: “That’s right. We’re trying to manage the review scores at the request of Eidos.”

When asked why, the spokesperson said: “Just that we’re trying to get the Metacritic rating to be high, and the brand manager in the US that’s handling all of Tomb Raider has asked that we just manage the scores before the game is out, really, just to ensure that we don’t put people off buying the game, basically.”

Wow, what honesty! Unfortunately for this PR firm, OXM UK and Eurogamer have already run 7/10 scores, and the Metacritic score is now at 78. Since when is a 7 a bad score anyway?

And what’s the deal with Gamespot and review scandals lately?

[Update: Barrington Harvey has responded to this issue with a statement, which you will find after the jump.]

The following statement is from Simon Byron, one of Barrington Harvey’s directors. From VG247:

Barrington Harvey is not in the position of telling reviewers what they can and cannot say. We love Tomb Raider and believe it merits a score of at least 8/10, but if someone disagrees that’s entirely their prerogative. No problem at all. Seriously: no problem.

Our original NDA stated that in order to receive an advance copy of the game, reviewers agreed not to post reviews ahead of 5:00pm, Wednesday 19th November 2008. Nothing else. No further obligations whatsoever.

As you can clearly see from the scores posted so far, Barrington Harvey has no issue with scores of below eight out of 10 being posted online. The Eurogamer review in questions caused “problems” in so much as it originally contained a couple of minor factual inaccuracies which, to its credit, the site has quickly rectified and addressed (without, quite rightly, changing the context of the review).

Any site, be it Gamespot or whoever, is entirely within their rights to post whatever score they want and no-one is under any sort of obligation to delay any review.

As an ex-journalist myself, I firmly believe in editorial integrity and the right to express an individual opinion. As an agency, we never – ever – make demands of the press in terms of awarding scores; at the end of the day, they are free to score as they wish.

Barrington Harvey has been working hard to ensure the launch scores of Tomb Raider Underworld are in line with our internal review predictions over the launch weekend – but to suggest that we can in some way “silence” reviews of the game is slightly overstating our influence.