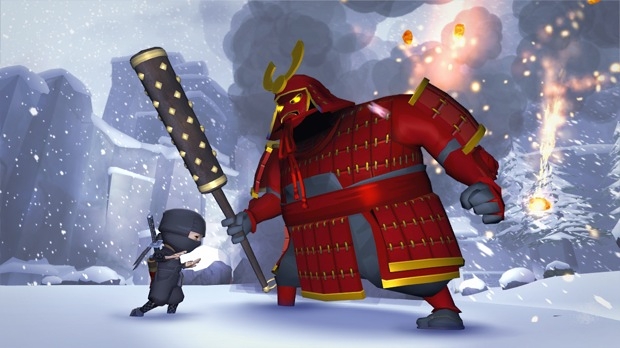 Today, Eidos dumped a bunch of screenshots for io Interactive’s Mini Ninjas. The developer’s name should ring a bell if you’re into killing people — io are the guys responsible for the Hitman series and the less cool, but equally sadistic Kane & Lynch: Dead Men.

As far as we know, Mini Ninjas won’t have players popping skulls with sniper rifles or star large bald clones with barcodes engraved on their napes. But don’t let that cloud your vision. What it lacks in violence, it makes up with character. Look at those cute little ninjas and baddies. Don’t you want to just reach into the screen and pinch their cheeks?

Mini Ninjas is hitting for the Nintendo DS, Wii, PlayStation 3, PC, Xbox 360, and PlayStation Portable in the fall. Below in the gallery, you can check out screens from all the versions. (The DS version has the appearance of being decent, so this might be a once-in-a-lifetime port.)

Hit the break for the press release, which includes a decent plot synopsis and don’t forget to tell us what you think about Mini Ninjas in the comments section.

Into a beautiful, colorful land, a malevolent plan has hatched. The Evil Samurai Warlord has begun to use the ancient art of Kuji Magic to twist innocent forest animals into mindless Samurai warriors to do his bidding. After amassing an army of these soldiers, he sends them forth to terrorize the surrounding countryside.

In the far corner of the empire, the Ninja Master sees that something has gone terribly wrong in the world – he knows that the balance of nature has become disturbed, but by what? He does not yet know that his old nemesis has returned, but he knows at least that his sworn oath to protect the balance of nature must be upheld.The Ninja Master chooses his most skilled Ninja to send on the quest to discover the source of the storms. Time passes but there is no word from the Ninja. Again, the Ninja Master chooses another of his best, but again he doesn’t return. Again and again he sends his pupils forth on the mission, but again and again they vanish.

Finally, there are only two Ninjas left in the village – and these are the last Ninjas he would ever have considered for such an obviously perilous quest. Hiro, the youngest of all the Ninjas, and his best friend Futo, the largest (and slowest). Hiro has not yet even completed his training, but the urgency is real. The Ninja Master knows that they must be quickly made ready. They must embark on a journey to get to the bottom of this mystery… to find their lost friends… and to confront the Evil Warlord himself in his fortress of doom….

In these latest screens from the game, Hiro, and his Ninja colleagues –  the hammer wielding Futo and musical Suzume – battle the Warlord’s samurai minions, within a snowy, mountain filled valley.

You will also see the Ninjas conferring with the Tengu, bird-like caretakers of the wilderness temples, hidden away in remote corners of the world.

Coming this Fall to the Xbox 360, PS3, Wii, PC and DS, featuring a classic Japanese art style, let the training begin for the epic journey that awaits in Mini Ninjas!