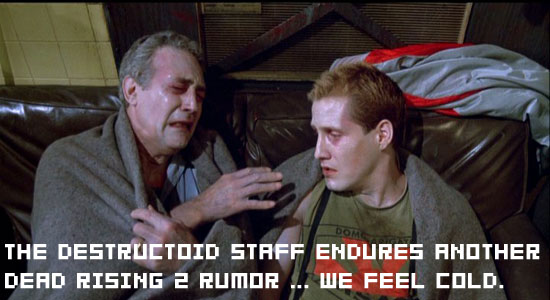 Like corpses reanimated by leaky, top secret government barrels of gas stored in the basement of a medical supply warehouse, the rumors of a Dead Rising sequel have once again risen from the grave.

This time they come courtesy of Electronic Gaming Monthy‘s Quartermann, who claims that Dead Rising 2 is being developed by an LA-based developer for multiple platforms. Whether this game will be out before or after the co-op Quartermann said the original Dead Rising was going to receive is unknown. Regardless of whether this is true or not, I’m sick of the Dead Rising sequel rumors — just make it happen already, Capcom.

If one and only one rumor were to be true, I’m crossing my fingers for a Dead Rising sequel (provided it’s in the right hands). I already intend on playing Chains of Olympus on the PSP, Everyday Shooter just needs to get PSP remote play capabilities, and a Team Ico game is a no-brainer. But a PS2 motion controller? I can’t think of a single drug that would make me think that’s a good idea.