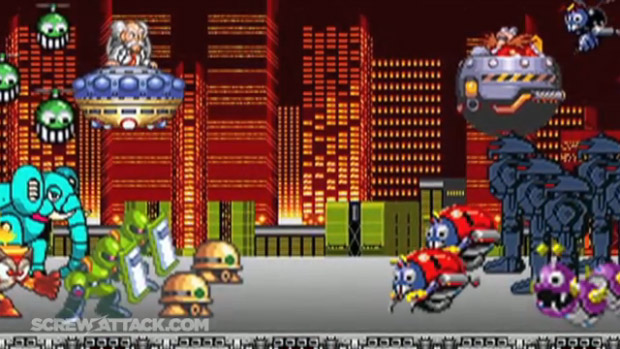 I’ve been a huge fan of ScrewAttack’s Death Battle series since the bloody beginning. It evokes those schoolyard arguments whereby one kid would say that the Ninja Turtles could beat the X-Men or some other ridiculous crossover fantasy nonsense. It’s the Celebrity Deathmatch of geek culture, and I hope it lasts for a billion episodes.

The show was formerly hosted on Revision3 but is now hosted directly by ScrewAttack. Aside from not having to advertise sponsors anymore, it’s the same show we know and love. Still, what better way to break in the new digs than with the biggest match-up yet!

On Christmas, the highly anticipated Eggman vs. Wily battle was finally posted. Unlike previous combatants, Eggman and Wily are not known for taking to the battlefield directly unless all other options have been exhausted. To that end, this episode was not a one-on-one but a full-scale war between the two doctors’ robot armies. Representatives from the pantheon of Sonic and Mega Man foes, such as Metal Sonic, various Robot Masters, and even friggin’ Scratch and Grounder, were selected to hopefully tip the scales. Of course, with so much chaos on screen, there are bound to be some curveballs thrown.

Check the video at the link below. I’d post it here, but ScrewAttack’s videos autostart. Boo! Check it out! A non-autoplay copy of the video!