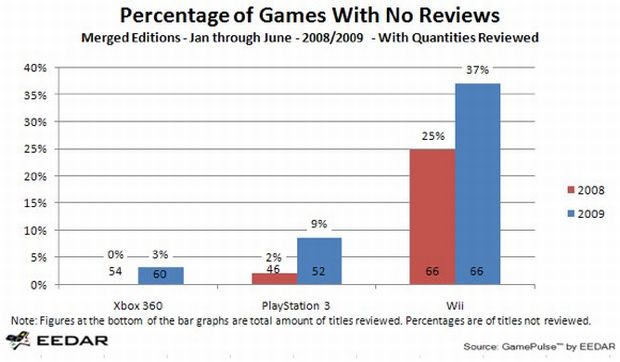 We joke about all the shovelware on the Wii around here, but seriously … its kind of out of control just how much there is. This recent report from EEDAR really nails it: while 3% of the 360 titles and 9% of PS3’s titles went unreviewed so far this year, the Wii weighed in at a whopping 37% of games unreviewed. Even worse, that went up 12% from last year, where 25% of the year’s releases were more or less completely ignored by reviewers.

EEDAR analyst Jesse Divnich did acknowledge that the general review score for a Wii game has gone up, but he also thinks it could be because more of them are being ignored entirely. He also comments further on Wii games getting better:

It is just coming at the cost of not reviewing the increase in casual and low-budget titles … a  similar issue could appear with respect to PS3 and Xbox 360 as the consoles’ casual demographics increase in conjunction with the continued growth of their install bases.

I want to beg developers to just spend more time on these games instead of shoving out uninspired projects and hoping for a quick return, but what do I know? I just play em, I don’t make em.