Wow. I didn’t know this DLC thing was catching on. I knew that everyone was making DLC, but I thought we were all just letting it float by like trash in a river. Oh, did I say that out loud?

I’m kidding! Kind of. There’s some good DLC content out there. There’s more of it and there’s better stuff out there than ever before, and for the first time the majority of gamers have jumped on the bandwagon. EEDAR’s latest report, Deconstructing Downloadable Content, says that 51 percent of gamers pulled down some kind of downloadable content this past year, up from 40 percent the year before.

Someone’s doing something right on the downloadable front! EEDAR estimates that DLC will generate $875 million in 2011 and will exceed $1 billion next year in North America.

So who’s not buying DLC? The 49 percent that haven’t joined in the downloadable fun say that privacy is a major concerned. They also don’t like that you can’t return DLC or try it out with a demo.

Below the jump you’ll find a breakdown of who did and didn’t buy DLC last year.

Where do you stand on DLC? \ 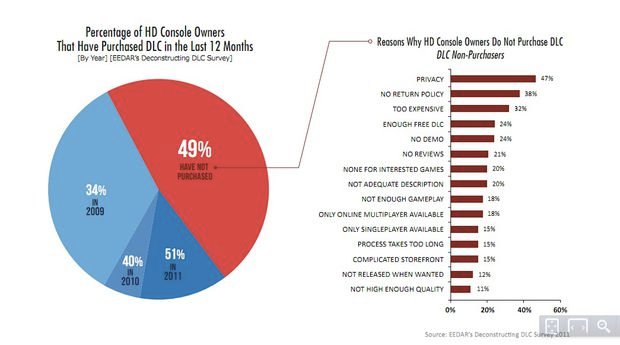