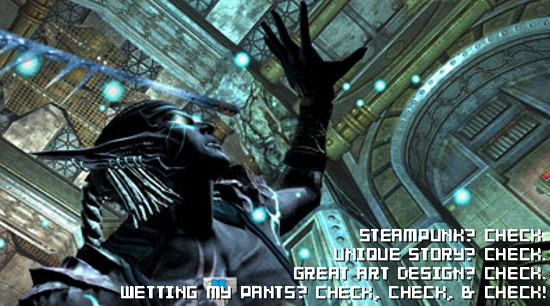 Eurogamer has some pretty awesome-sounding details concerning the steampunk adventure Edge of Twilight, due for PC, Xbox 360 and PS3. The game is said to be heavily story-driven, with the tale of amoral bounty hunter Lex being “fundamental” to the game. The storyline also aims to truly blur the lines between good and evil, as nothing will be done in the game without some sort of justification for the action, as explained by the developer, Fuzzyeyes:

“A lot of games that blur the lines between good and evil will focus more on giving you two choices that are obviously good and bad. What we’re doing is putting the player in a world were nothing is, or has been, done without justification.”

Lex is a half-breed outcast from the two opposing factions that make up Edge of Twilight‘s world. As someone bred of both the light race and the dark race, Lex will have the ability to shift between two different personas depending on his surroundings.

“As the day persona, reflecting the industrial race, you’re strong and forceful with the ability to operate machinery, break the scenery and bludgeon enemies in a manner tha’s less than graceful. As the night persona you represent the spiritual race and your movement is much more swift and agile, opening up new areas to explore, and your fighting style also reflects this. Many environments will require you to use both of these abilities and your brain to find an exit, which allowed us to make some mind-bending environmental puzzles that span over the two realms.”

Although not an RPG, Edge of Twilight will feature a lot of customization. We should also get it out of the way now — there is no multiplayer, so you can get over the lack of that meaningless addition now and get super-interested in what sounds like a highly compelling adventure game.