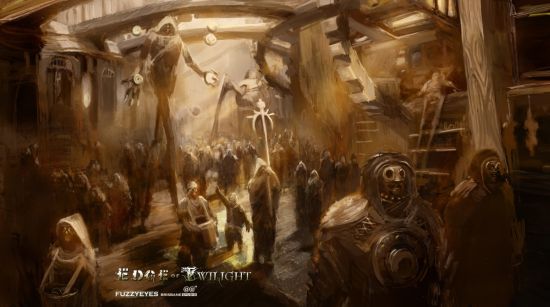 We talked about Edge of Twilight back in August 2007, when its steampunk art stylings first hit the internet and had people arching their eyebrows with curiousity. Despite the excitement over the tone of the concept art, the general air was still one of skepticism considering similarly styled titles such as City of Metronome are still fighting to meet reality.

Perhaps Edge of Twilight will fare better, considering it has just been confirmed by Southpeak Games for a 2009 release for PC, Playstation 3 and and Xbox 360. Southpark had a few words on the upcoming title:

“We are very excited to help bring Fuzzyeye’s creative vision to life. The team spent a lot of time developing a comprehensive story to give the universe a history and purpose, which can change based on the players interaction within the world.” said Melanie Mroz, CEO of SouthPeak.

I’m still a bit skeptical, but also excited that a title like this will end up on my PS3. I feel like I finally got my epic RPG for the 360, but I’m still waiting patiently for the first one I will fall in love with on the PS3. This isn’t an RPG, but it certainly has all the elements that make me go rabid for a game. Of course, Fuzzyeyes also made a fine title previous to Edge of Twilight about hot dog waitresses. That ought to keep my excitement under control for a while.

[Via Totally360– Thanks, Jonathan]