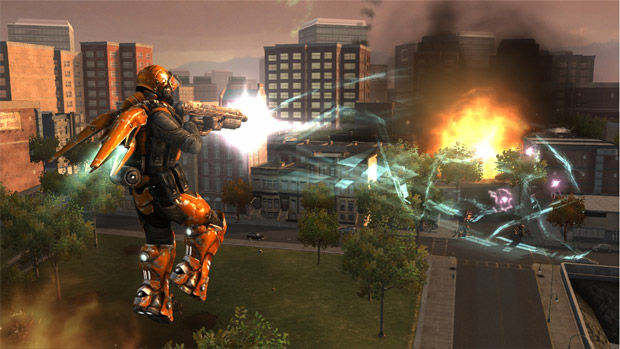 As of today, you can download the “EDF Battle Armor Weapons Pack” and the “EDF Jet Armor Weapons Pack” for Earth Defense Force: Insect Armageddon. These were previously offered as pre-order incentives and can be bought for $3 (or 240 Microsoft Points) each on PlayStation Network and Xbox Live, respectively.

You can complain about it, sure, but I’d rather people have the option to get this stuff post-release than not at all. Might as well make the best of a rather crummy situation.

Lately, Insect Armageddon has become my go-to “I’m too tired to do anything but mindlessly shoot bugs” game, which is a purpose something’s got to serve. You can only catch the second half of Starship Troopers on television four times in a single month before it starts to get old. Trust me on this.

If you are into EDF enough to know guns by their specific (and totally ridiculous) names, enjoy:

The Pounds of Pain! The EDF Battle Armor Weapons Pack features a total of 15 exclusive brutal weapons designed to send those bugs 6 feet under!  The pack will equip EDF’s customizable Battle Armor with eight new weapons including the C9 Turnburl x Shotgun and Brux Fab Chowbrow Grenade Launcher that promises to obliterate insects upon impact.  In addition, the Trooper and Tactical Armors receive exclusive upgrades of their own including the RLF -17 Floorboard Rocket Launcher and the VanSnaster SpreadBurst Assault Rifle.

The Death From Above! The EDF Jet Armor Weapons Pack includes 15 of the EDF’s most powerful weaons in one supply drop.  The Weapons Kit will equip EDF’s flying Jet Armor set with eight exclusive weapons including the Plantain Ind. Torchee Sniper Rifle and Brewbreaux 08b-m Missile Launcher.  In addition, Trooper and Tactical Armors also receive an exclusive set of upgrades including the El Gigante Rocket Launcher and the Wallagis 1776 L Missile Launcher.