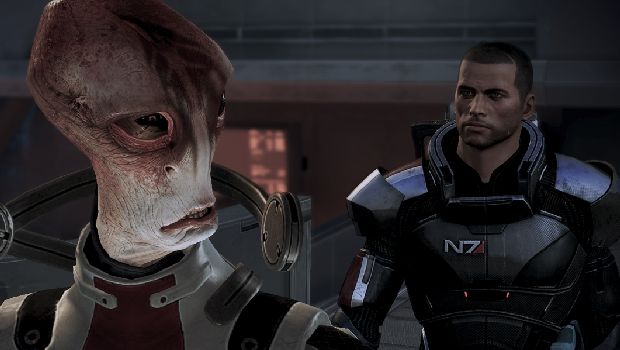 As I’m waiting in line to play BioWare’s third installment in its celebrated science fiction RPG series, Commander Shepard appears next to me. He is tall and imposing, complete with N7 suit and buzz cut. A young girl also waiting in line squeals in excitement and welcomes him with open arms. It’s a testament to a series that has built such a fan following in just a few short years that even a random person dressed as one of the characters can elicit such happiness from the public.

The demo (on Xbox 360) opens with Shepard, Liara, and Garrus’ teaming up to help Mordin free a female krogan from prison. She is being held there by Cerberus soldiers and there’s only a matter of time before they come back. It’s time to play Mass Effect 3!

In the interest of full disclosure, this demo is the same single-player slice of Mass Effect 3 that was shown at E3 in June and the Eurogamer Expo in September. Whether or not this demo at the EB Games Expo in Australia is exactly the same build of the game is unclear, but EA certainly seems determined to stick with it for public viewings.

Regardless, the atmosphere of the tropical medical facility hangs heavy. There are fires burning out of control, and smoke blocks out part of the sky. Mordin orders Shepard and his squad to make their way through the ruins and help him in his liberation of the krogan.

I take control of Shepard; it feels immediately familiar to anyone who has played the previous games in the series. The left bumper pauses the game to bring up the menu wheel, filled with weapon options for each character. The right bumper does the same for squad abilities.

As I move forward, I immediately notice something: everything seems to be saturated in a very fine, film grain effect. The white walls of the facility have flecks of dust on them, as does the air itself. I continue to advance only to confirm that it isn’t atmospheric residue of the fires, it’s actually part of the screen.

The Cerberus agents arrive, dropping down from the sky in jet-propelled battle armor. I take cover behind a bench and start firing. As I’m ordering my squad to attack, the combat is strikingly reminiscent of Mass Effect 2. The crouching and shooting feels like slipping on an old pair of shoes. 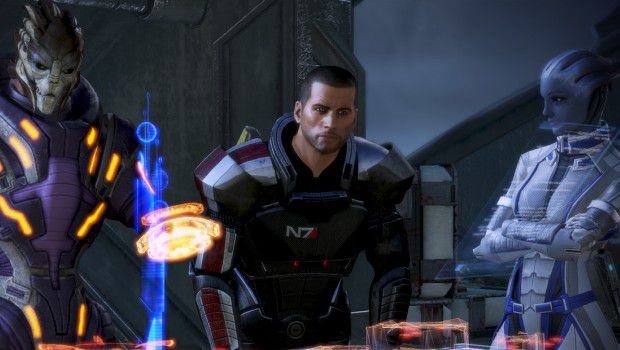 As we finish off the agents, I decide to try out the squad movement commands — left on the D-pad to order one squad member to advance to a position, right for the other. I order Garrus and Liara to move ahead. As they do, I notice that their running animations are terrible. Both shuffle forward as if they are floating slightly above the ground when moving into position. As they run, it seems as if their legs are too fast for the speed that their bodies are moving. I send them forward again, and sure enough, it happens again. Running animations aren’t a major component to any game, but I was surprised how much they stand out here.

I locate a workbench, where Shepard can now customize weapons on the go. I’m carrying three standard weapons — a pistol and a couple of rifles. Upgrading the weapons seems like a handy, easy-to-use feature that hints at a larger range of features.

As I order the squad back to Mordin’s position, I decide to take a look at the external view of the tropical terrain around the facility. Despite fires raging out of control and lush trees surrounding the area, I’m immediately taken aback by the jagged edges on the buildings outside. Moving the camera, the graphical roughness remains. I’m shocked by the lack of smoothness of the structures, making sections of the game feel unfinished. It overshadows an otherwise beautiful view of the planet. and I start to wonder what other visual issues I might stumble across.

None of these questions are raised during the cut-scenes. As expected, they look and sound great. Mordin still speaks with rapid-fire fragility, and Shepard exudes confidence with every word.

After finishing the demo, the graphical limitations become more evident the longer I think about them. If this is indeed the same build from June, I can only assume that BioWare has fixed these problems since then. As it stands now, I’m surprised at how rough the overall experience feels, and it raises far too many niggling questions I didn’t expect to ask.

It’s now October, and the game’s release is in early March. It begs the question why EA would keep showing this demo when hopefully there is a better version somewhere out there ready for consumption.