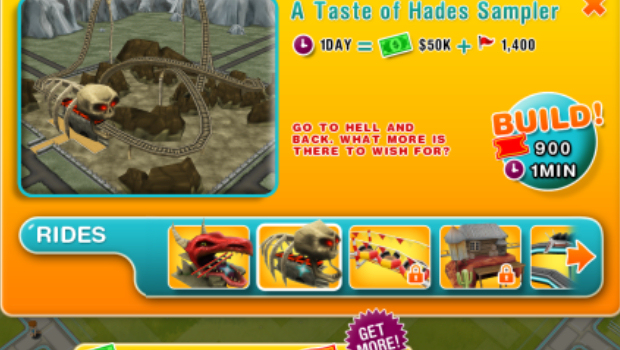 Electronic Arts is resurrecting Theme Park on iOS, but if you think that’s Bullfrog’s charming little simulation game has returned, you’re in for a sour awakening. EA has made it a “freemium” game, which wouldn’t be so bad if the concept of “freemium” hasn’t been mutated to Zynga degrees.

For starters, leveling up in the game (a requirement to get new rides) is painfully slow, presumably to encourage people to cheat with their wallets. Even worse is the fact that some rides cannot be obtained at all without in-game tickets bought using real-life money. Games Blog did the math to find the cost of one Skull-Train roller coaster and it’s … well, brace yourself.

Sixty dollars. It costs $60 for a single in-game roller coaster. And that’s one of the cheaper rides.

The tickets obscure the actual cost, very much like those horrible restaurant/arcade hybrids that encourage children to gamble with their parents’ money. However, under scrutiny, it would appear that Theme Park iOS is nothing more than a common garden scam.

Freemium games can have some ludicrous costs for in-game gold, but usually the items bought are purely optional and/or aesthetic in nature. Charging as much as a retail game for a single in-game ride is just scummy, and the fact they used the lovely Theme Park to do it is what really stings. Then again, I don’t know why I’d expect better from the company that’s put subscription fees in Tetris.