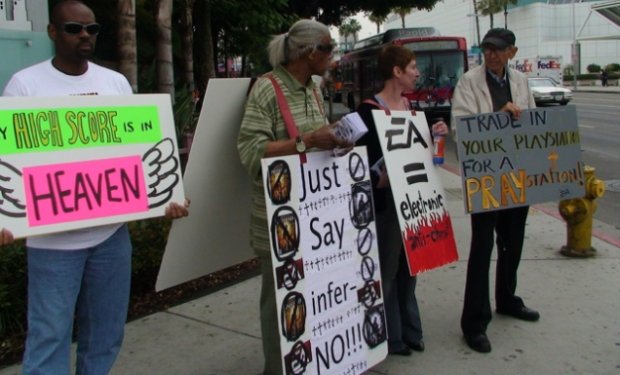 I’d just like to announce that I knew it was a fake from the start (or really quickly) and have documented proof of this fact. That being said, EA’s PR stunt at E3 in which they got a group of people to protest outside the LA Convention Center and hand out pamphlets directing people to WeAreSavedGroup.org in order to protest EA’s upcoming game Dante’s Inferno was a stroke of genius. You can call it dumb, or cheap or dirty, but the fact remains that it got them a crap ton of press in both the gaming world and the mainstream, and fooled a whole lot of people — whether they admit to be fooled or not. Sounds like a successful PR stunt to me.

Success or not, it appears that it has riled a few more feathers (and kept working as Dante’s Inferno is once again in the news). Like Pavlovian dogs trained to raise their head if someone mocks an aspect of Christianity some Christians were offended. “It’s been clear for a while now that the entertainment industry views Christians on the whole as priggish, thin-skinned fun-killers,” Margaret Cabaniss wrote at InsideCatholic.com, impressively proving the exact opposite of the point she is trying to make in only one sentence.

She’s not alone in her ability to present an ironic statement about how Christians are actaully hip and with it when it comes to gaming, which in fact most are, I’m sure. Catholic Video Gamers (who don’t know that God spells it “videogame”) had a few choice words to say too, culminating in, “So instead of engaging in a shamelessly anti-Christian stunt to promote your poor excuse of a product, maybe you ought to work on making this game, you know, something better than a blatant God of War rip-off and make it, ya know, something worthwhile?” Yea, I’ve met EA’s PR guys and, no offense, they’d suck at making a videogame. This was a much better and highly succesful use of their time and energy.