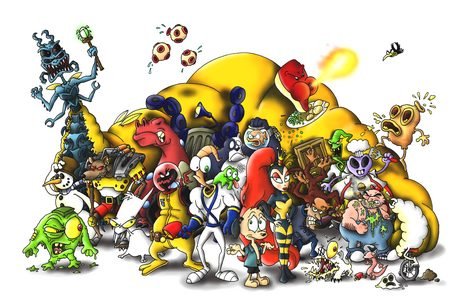 Do you guys remember that Earthworm Jim game that was supposed to be heading towards the closest PSP? No? Didn’t think so. Well don’t worry about it — what you don’t know can’t hurt you, and the game probably won’t see the light of day.

Vague reports of some other, possible, maybe, kinda, sorta EWJ game aside, the future looks bleak for the Annelid Avenger. Alissa Bell, official Bad News Bear at Atari, who stil owns the Earthworm Jim license, had this to say:

“I believe Earthworm Jim is off the roster.” [It] may be revisited in the future, but the title is, as I hear it, on hold.”

Well, shucks. It seems like the game just kind of fell through the cracks, what with Shiny being bought by Foundation 9 and all.

As somone who recently played through the original Earthworm Jim in all its 16-bit glory and had a mild stroke when Can O’ Worms wouldn’t run on Windows XP a decade after its initial release, you could say I’m a bit of a fan. My only hope now is that Messrs. Perry and TenNapel make good on that hypervague promise.

And yes, I’m re-using this image, but its awesome so shut yer pie-hole.