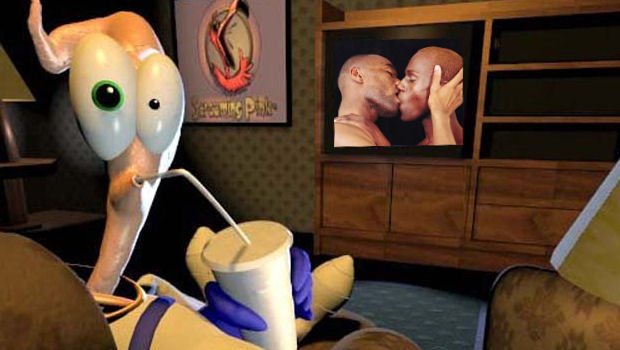 Earthworm Jim creator Doug TenNapel is, apparently, a living parody of American bigotry. Recently, the artist made several amazing comments on the subject of Christianity, gay marriage, and why AMERICURRRR is the best damn country in the world.

According to TenNapel, freedom of religion and expression is a completely alien concept to Canadians and Europeans, and America is the best country in the world because it’s 78.5% Christian. This is the kind of outrageously stupid shit I get to see in local opinion columns and TV shows out here in Mississippi on a regular basis.

Whether he thinks he’s being funny or not, Gay Gamer ain’t laughing, and I’m inclined to agree with them. It’s pretty sad to see such miserable opinions, especially from an otherwise talented guy, but gay people don’t need to be angry about it. Gay marriage is going to happen anyway, because nobody, no matter how much they claim to have a deity on their side, can stop the march of social progress forever.

LGBT campaigners are fighting a fight they can only win. Their efforts determine the when, not the if. And that is, to quote Earthworm Jim, Grooooovy.