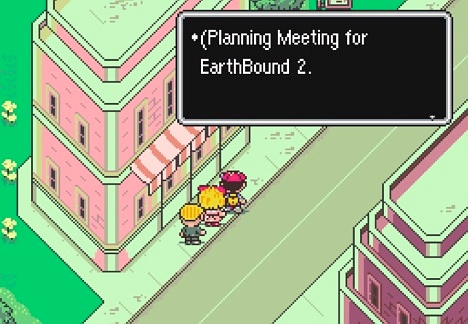 Whenever someone mentions EarthBound to me, I flash back to that time I sat on my bedroom floor drawing pictures of Ness on envelopes. My goal was to send the marked envelopes to Nintendo Power and put a note in each one demanding work on EarthBound 64 to resume. I don’t know if I ever sent the letters, but I do remember feeling deflated — as if my entire videogame world crumbled because of Nintendo’s deaf ears and tight belts.

And the bad news never seems to stop. According to a Starmen.net source, EarthBound won’t be released on the Wii’s Virtual Console anytime soon. The port has been mired in a legal hell as a result of the original game’s numerous references to popular culture. Nintendo of America’s lawyers are uncomfortable with the material and want it changed. Nintendo’s Japanese wing — for whatever reason — have refused the exclusion of the content.

The crew at Starmen also revealed that the ESRB rating months ago was nothing more than an “internal” blunder. The EB port was problematic from conception. Perhaps as problematic as our desire for a new release.