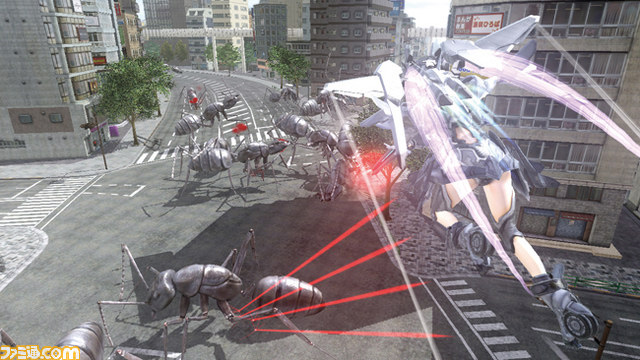 The new issue of Famitsu currently on stands in Japan features a preview of Earth Defense Force 4 with a whole mess of exciting information. The title, currently in development by Sandlot for Xbox 360 and PS3, is set 8 years following the events of Earth Defense Force 2017, when the recently-rebuilt human civilization must deal with an alien infestation thought to be long over, using powerful technology left behind by the initial invasion.

The feature (as translated by the good folk at Gematsu) introduces the playable “Wing Diver” unit, one of an all-female corp of airborne warriors wielding powerful “Foreigner” weaponry. It also hints that the multiplayer elements introduced in the US-developed Earth Defense Force: Insect Armageddon will be expanded upon with, with “large” numbers of players able to participate in games together online. What that means, I don’t know, but I think I felt a tingle somewhere.

Please, (insert your omnipotent being of choice), I don’t ask you for much. I didn’t complain when you made me short, or hairy or lacking in compassion for my fellow man. I’m even okay with that slight clicking thing that my jaw does. Just help the people at D3 find it in their hearts to bring Earth Defense Force 4 into my home with a stateside release. The world will be a better place.