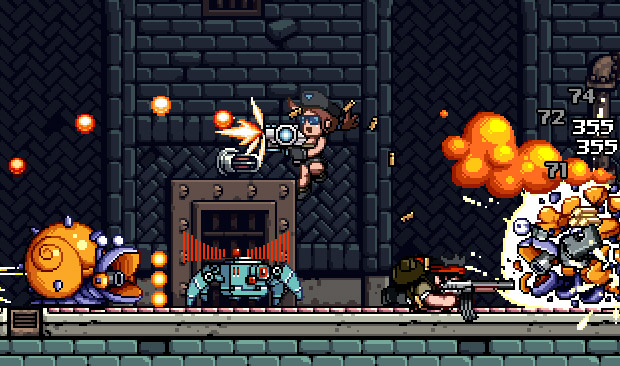 If it’s been a while since you paid much attention to Mercenary Kings, you’ll want to get the side-scrolling shooter back on your radar by watching this new trailer. It’s officially here to announce that the title is hitting Steam Early Access on July 22, 2013 but also serves as an excellent little recap of what makes this look appealing. (The robo-snails, obviously.)

“We are well aware that we’re behind our schedule, but we believe it’s for the best,” Tribute Games wrote in a Kickstarter update. “Because we’ve sailed past our 75k goal, we decided to spend more time to work on the game (adding more levels and the online component have been time consuming). The Early Access Version of the game will end up being a beefed up version of our first milestone. Then, Early Access will allow us to follow our plan to keep working on the game until we make the best possible version of Mercenary Kings!”

Kickstarter backers who contributed $15 or more will get this version of Mercenary Kings as their digital copy of the game. For everyone else, it’s going to be $15 during the Early Access phase and $20 afterwards. Good to know.