Requiem: Bloodymare is Gravity’s recently launched (and oddly named) free-to-play MMORPG. Rather than trying to appeal to every MMO enthusiast under the sun, Requiem is instead marketed as a more mature alternative: stocked full of violence and horror elements.

I recently gave the game a spin to see just how spooky and violent it really is. I also wanted to find one of those bloodied horses the title makes reference to, but was never was able to track one down. Hit the jump for my impressions after the first few days of play.

The first thing I noticed upon entering the character creation screen was the very limited amount of choices. Requiem limits players to only three races (the balanced Turan, strong Bartuk, and magical Kruxena). This doesn’t sound so bad at first, but each race starts with only one class (refereed to as jobs). This job is just a sort of placeholder for you to get used to the game with, and you’ll be able to pick one after a few levels, but there are only two choices per race. Further down the line you’ll be able to pick between another two advanced jobs, though.

Avatar customization is another area that’s pretty restrictive, giving a choice between only a few different faces and hairstyles. You can’t even choose hair and eye color! This wouldn’t have caused me to bat an eye back when I was still playing Everquest, but that was eight years ago. It just struck me as odd seeing as how, in general, MMOs have been putting more and more focus on character customization as time has gone on. Also, is it just me or does the default Turan male look a hell of a lot like Final Fantasy XII’s Vaan? 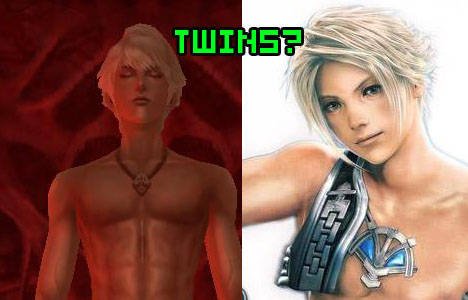 Whatever, free game is free, right? Since the name Vaan had already been taken I made myself a red headed Turan, picked my starting location, and began my new adventure.

Appearing on Turba Island I was greeted with several popup windows that explained the game’s basic controls. Due to my past MMO experiences (and my general disdainfor popup windows) I quickly closed them all: figuring myself far to experienced to be inconvenienced by such things. There was also an NPC a few feet in front of me with a bright yellow exclamation point over her head, the telltale sign of an available quest. I decided to wander around a little first, though, and look to see if I could discover the source of the some strange roaring noises I was hearing.

It didn’t take me long to find a small beach full of Toadtauruses (yeah, an anthropomorphic cow/frog hybrid) to be the cause. Curious to try out one of Requiem’s biggest marketing points — the bloody and violent combat — I started attacking the nearest Toadtaurus with two quick mouse clicks.

Our fight did create a lot of blood — every hit resulted in a big red spray of the stuff and once I dropped the Toadtaurus down to 0 hp his arm flew off — but it didn’t feel all that violent. That might be in part because, big sprays of blood aside, the combat feels exactly like the combat in every other MMO. Select monster -> attack monster -> spam tactically select spam spells and special abilities -> right click to pick up the pile of dropped loot -> rinse and repeat. 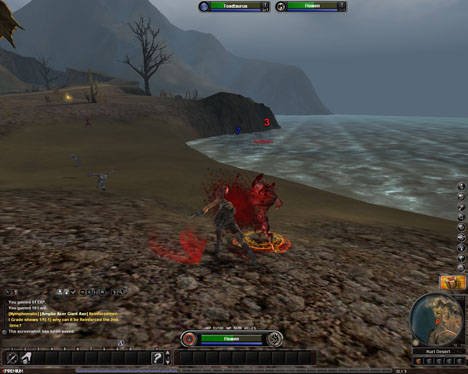 Another area of the game that should seem very familiar is the heads-up display. It felt very familiar and intuitive at first, but I quickly realized that was because I’d seen it so many times before. Gravity did a great job of picking out the best elements of several different games’ interfaces and polished them up nicely. It may not be new, but it works well (and for the first time ever I didn’t have to move stuff around and change the default settings) so there’s certainly nothing wrong with that.

After running around and killing a few more of the ugly cow-toad things I headed back to that NPC at the starting location to get my first quest. It shouldn’t really come as much of a surprise, but the quest system is also very similar to those found in other *cough*WoW*cough* MMOs. So, my first task was to find a Temperion Master Kinto who would tell me more about what’s going on. Prompted by the quest-giver I followed a small path that lead to a nearby town. The place looked to be in pretty bad shape at first, with several buildings crumbling apart, but that was mostly just on the west side.

This town also severs as a reminder of the jarring technological differences in the world of Ethergia. Like a typical fantasy town situated in a rocky environment many of the buildings were simple stone affairs populated by blacksmiths, traders, and townsfolk. Mixed in alongside them, though, are spotlights, teleporters, and doctors happy to experiment on your DNA. 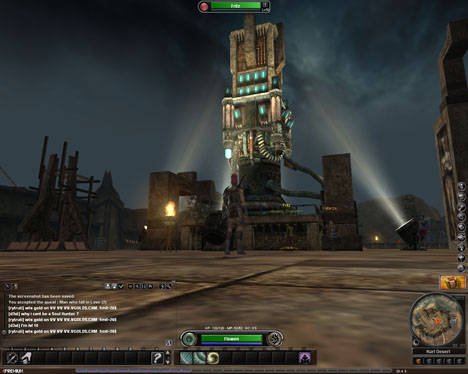 This notion of inconsistency was reinforced once I tacked down Kinto, who gave me a bit of backstory. Apparently, my character is some sort of bioengineered cyborg created by the Ioxenic (a company that supplies people with new technologies) and is tasked with killing monsters and collecting technological relics. These monsters were created some time in the past when the more advanced Xenoas race decided to build a super-weapon called the Thanatos Project that combined both magic and science. The thing ended up violently exploding (as super-powerful magical machines are wont to do) and ended up infecting the planet with a sort of magical radiation. This not only caused normal animals to mutate into their current grotesque forms, but has also caused more powerful Nightmare Monsters to appear during the night.

Anyway, Kinto gave me a helmet that was ever so slightly better than the one I started with along with another quest. He wanted me to go back outside the town and hunt some Toadtarus. But I just did that! After this I completed a lot of different fetch quests, killed quite a few more monsters (desert hounds and imp things), got several more pieces of slightly better equipment and explored the surrounding landscape. It was during this exploration that I realized my biggest beef with Requiem: Bloodymare: its mood, or lack thereof.

The game calls itself a violent horror MMORPG but puts little to no focus on the horror aspect, which is really quite a shame. There were plenty of good opportunities to set a scary mood — namely in the music and during the dark hours of night when Nightmare creatures come out — but Gravity totally dropped the ball on doing so. 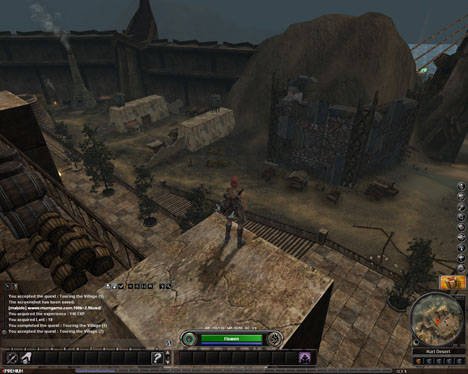 The music is probably the most disappointing aspect of Requiem, mostly because there’s hardly any of it there. As I wandered the game’s environments all I heard was the sound of my character running, some of the nearby monsters repeating the same growl every so often, and some bird calls. Occasionally some music will randomly start up, but will then die off after a few seconds. I don’t know what the deal with that is, but the obvious lack of sound really kills the overall experience.

The concept of Nightmare Monsters sound interesting on paper: During a few hours at night the game world will be taken over by more powerful and horrific monsters while becoming an all around scarier place. As it turns out, all that really happens are a few tougher monsters start spawning in certain areas so that groups can camp them for their rare item drops. Again, that’s pretty disappointing in regards to the horror themes that are supposed to be there. It would have been so much cooler if the graphics, character and monster models, and (almost nonexistent) music warped slightly to make the period more tense and frightening. I guess this could be addressed in future updates, though.

Requiem’s visuals are ok; not bad, but not that impressive either. I did have an occasional problem with some NPCs and monsters just randomly popping out of thin air, even though there was no lag to speak of. 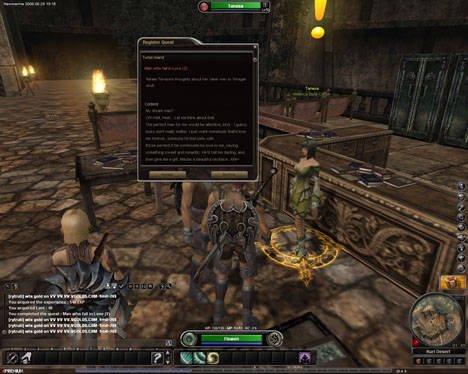 Aside from picking a job and using a (surprise!) very familiar skill system, there is also a DNA system, Beast Possession system, and large scale PvP to look forward to at higher levels. The DNA system offers further customization by allowing you to alter your character’s stats and gain new abilities by rearranging sequences of its DNA. The Beast Possession system allows your character to turn into a big freaking monster once you fill up a “hardcore gauge” by killing monsters. PvP is supposed to go all the way up to 96-vs-96 battles, which sounds like it could make for some pretty chaotic fun.

Although the basic Requiem accounts are free, there are also two payable options ($7.99 and $14.99) that let your characters earn experience faster, get better item drops, and lower death penalties. These payable accounts don’t really look like they’ll be worth it for me, but your mileage may vary. Despite some of its shortcomings Requiem: Bloodymare is a pretty good option for people that really like MMOs, but hate having to pay a monthly fee. Seeing as how the regular accounts are free, go ahead and download the client here if any of above sounded at least somewhat interesting.