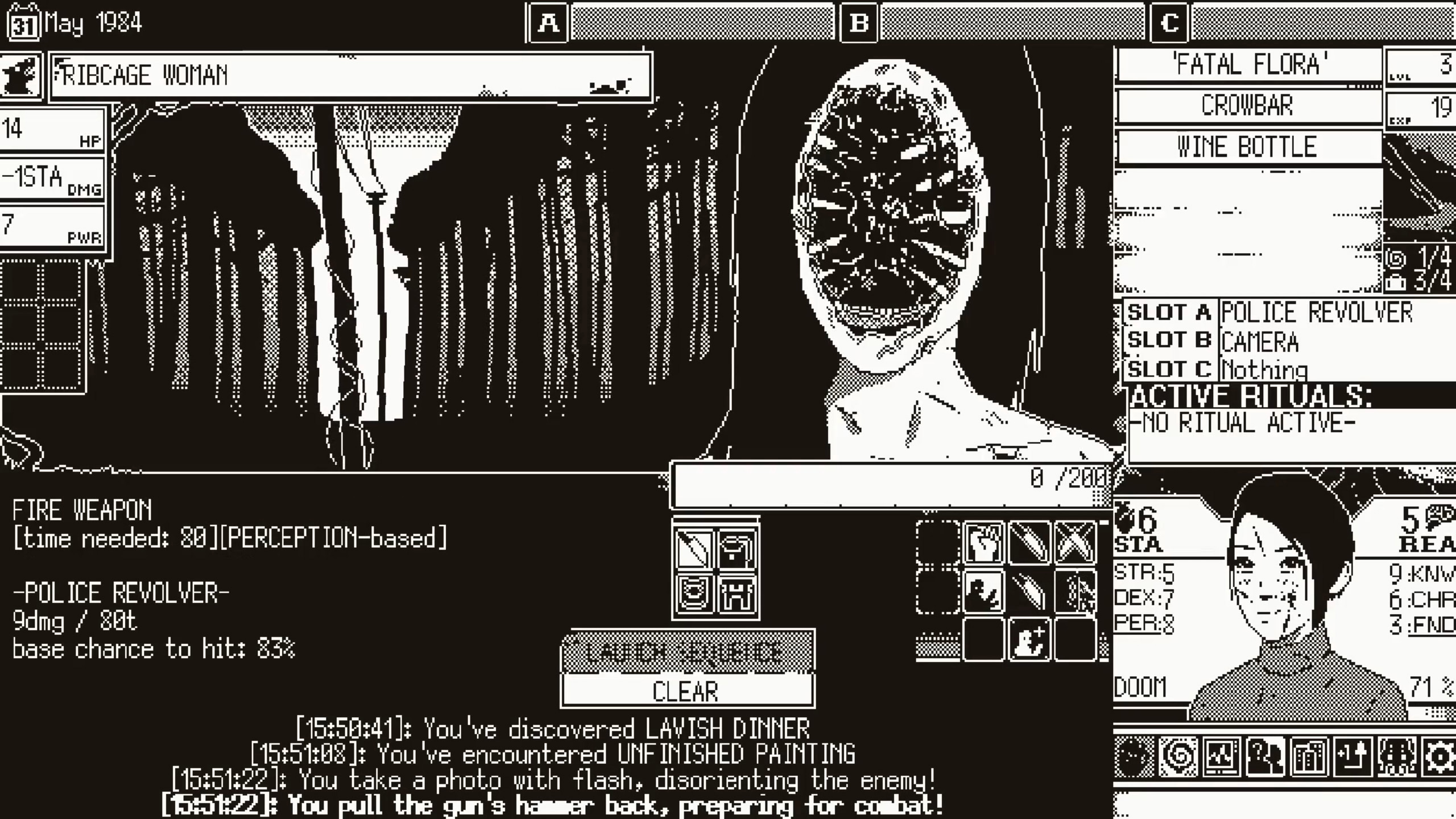 Reality isn’t what it used to be

I didn’t expect to be this into World of Horror‘s unfinished Steam Early Access version. It’s a rare treat.

I’m a huge fan of horror manga creator Junji Ito’s work (I even have his cat diary!), and I think it’s long overdue for his influence to spread to video games more directly, but I wasn’t sure this was the right time for me to absorb a text-heavy point-and-click RPG. I can be super finicky about Early Access.

I’ve seen some of you express similar concerns, but don’t let those fears hold you back. Face them. 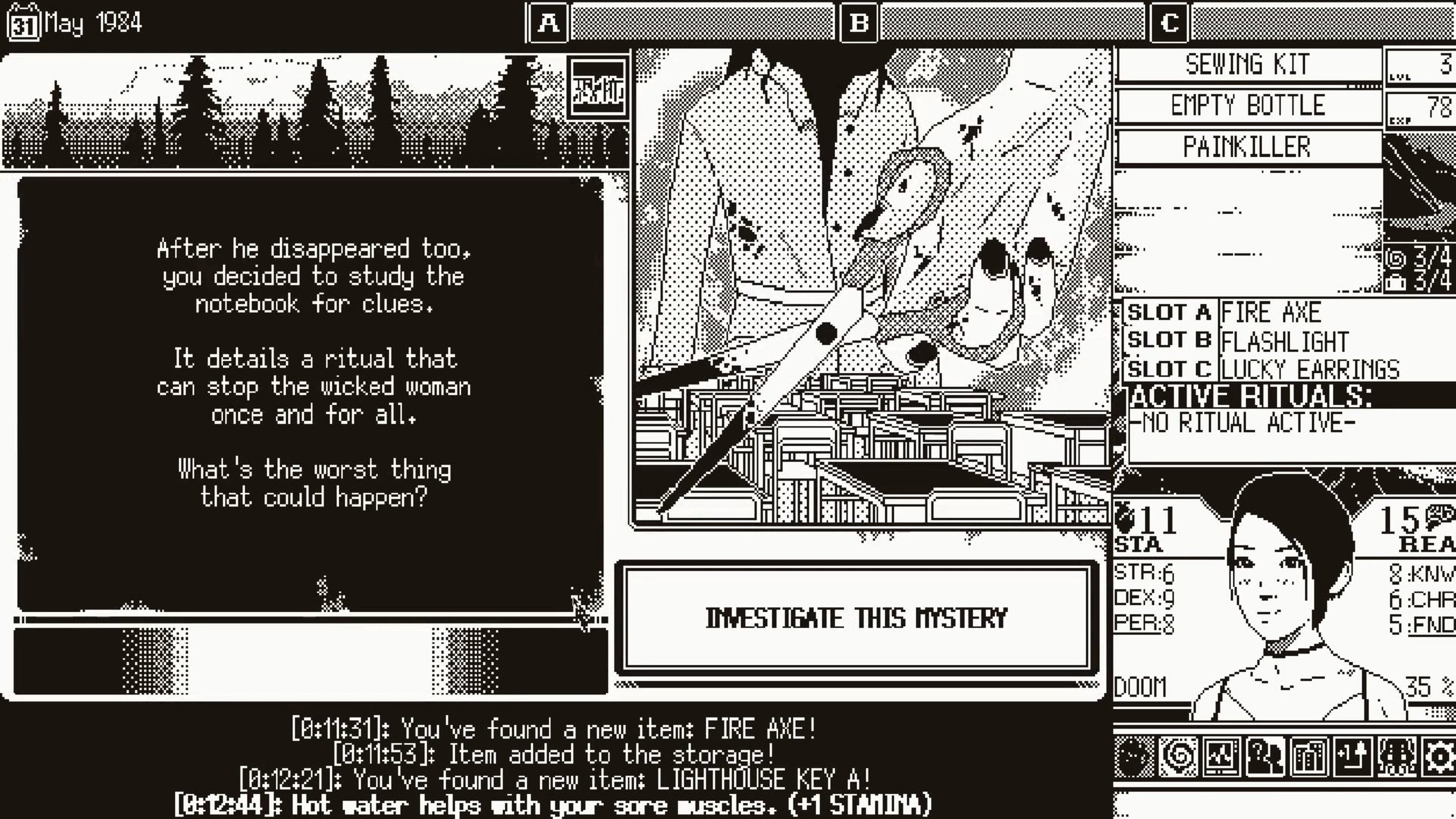 The thing that makes World of Horror work now, in Early Access, is its format – it’s modular. You’ll only encounter five mysteries on a single playthrough, and most of them have multiple endings, to say nothing of the many semi-randomized events and morbid enemies you might encounter along the way.

My big fear was that by playing an incomplete build, I’d sour myself on the final, finished, matter-of-fact story – something I’ve experienced before with other games. That’s not the case here. The developer, panstasz, does plan to add more story content in 2020, but World of Horror feels whole enough as is.

A basic run-through goes a little something like this. After starting a fresh Quick Play story, the game will share a snippet about a random Old God and its ensuing gameplay effect. You’ll see a beautiful lo-fi screen of your seaside town – a convincing “1-bit” throwback aesthetic that courses through every aspect of World of Horror – and step into your apartment to choose one of five stories from a wider pool of possible tales. They all have their own atmospheric intros, and it’s easy to see which endings you’ve achieved on prior runs. For each mystery you solve, you’ll get a key, and with all five keys, you can open the town’s lighthouse and stop the madness. Currently, in Early Access, there are a dozen mysteries.

If you aren’t ready to surrender yourself to full RNG, there’s also a tutorialized mystery to get you situated (the Spine-Chilling Story of School Scissors), and a couple other modes that give more control over your starting character and what factors are in play during your run. There are difficulties, too.

With all that said, this game takes some practice. You’ve got Stamina (health) and Reason (sanity) points to keep topped up as best you can; bathing, buying or finding healing items, and making educated guesses during multi-choice story prompts can all help in this pursuit. There’s also spellcasting (which can help or hurt you depending on your circumstances), an XP-based leveling system (with perks and further attributes), inventory management, ailments, allies (if you recruit any), and a “town status.”

That might sound like a hell of a lot to consider – it really is, especially in such a jam-packed user interface – but it only takes a few perceptive runs to acclimate to most of the bespoke buttons and icons. Once you get used to the flow of World of Horror, it feels comfortable. You can fly through it.

When I think of roguelikes or even roguelites, I think of incremental progress. I think of small victories. And while the same can be said of World of Horror, it doesn’t feel that way while I’m playing. When I succumb to a reality-shattering sense of doom, or I fall in a turn-based battle against a nightmarish beast because I had too much pride to flee and my queued-up attacks kept missing, I’m still satisfied. I’m still enjoying these Ito-inspired tales. It’s bizarre, but I have almost as fun losing as I do winning.

I’m hesitant to go into too many specifics about any of the stories. One of them involves nasty eels. Another, makeshift mermaids. There’s even a long, stretchy, perverted vent arm. Some stories are short and sweet; others are far more involved, like a mansion-bound vigil with particular steps to enact at particular hours. World of Horror isn’t about jump-scares. I’d sum up its vibe with one word: sinister. 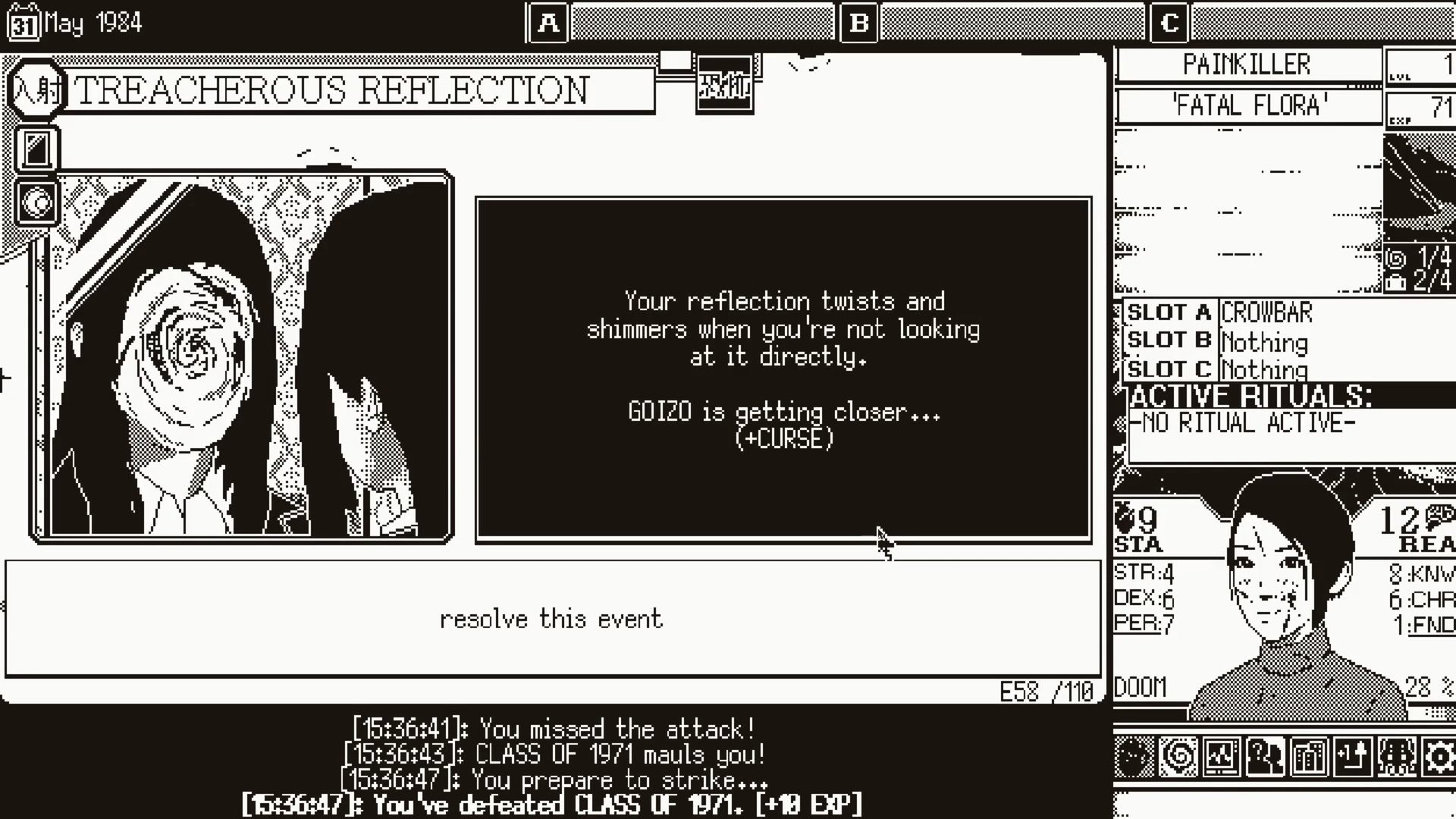 If I have any complaints, it’s that combat can grow overly familiar. Each action you take – offensive or defensive – eats up space on a timeline for that “turn.” If you don’t have any weapons or spells at your disposal, there are only so many tactics to try before you figure out a go-to approach. Tedium creeps in.

Repetition can also materialize during the samey exploration that precedes most of the self-contained story finales. The game will straight up tell you which areas to check out – downtown, school, the seaside, and a few other locales – and you’ll follow along, dealing with harmful or helpful events that pop up after each investigation until the Big Moment happens and you make an impactful choice. Sometimes, this system works well. Other times, it risks feeling like you’re gallivanting around town.

A few storylines go above and beyond, mechanically speaking. That’s something I hope to see more of.

The writing hits the mark more often than not, and even when it doesn’t, the eerie chiptune soundtrack and rising tension during a long, hard-fought run are there to give the text descriptions that extra zest. I’m compelled to track down every alternate ending solution and fill out my bestiary and event codex.

It’s tempting to look at World of Horror and file it away for a rainy day, but don’t feel like you need to wait until version 1.0 launches to crack some spooky cases. The Early Access build is already in a great place, and given the game’s modular design, you shouldn’t feel burned by future story updates.