You’ve probably played parts of Dead Cells before. Its DNA is familiar, a patchwork assembly of recognizable influences. There are echoes of Symphony of the Night and Super Metroid in the 2D action platformer. Rogue Legacy‘s persistent unlocks across randomized runs reinforce Dead Cells‘ core gameplay. Even Bloodborne, with its hurried melee strikes and rallying health regeneration, informs its fast-paced combat.

It’d be easy to look at the borrowed bits and reworked ideas mentioned above and write Dead Cells off as a weird Frankenstein’s monster title, full of copied mechanics and gameplay systems. On paper, it sure reads like that. But to play Dead Cells and see how its pieces come together; to feel how it adopts elements and twists them together to create something different, is to experience a vision of excellence. It looks great and plays even better. It’s an electric mix of polish and challenge that’s all the more impressive considering the metroidvania/rogue-lite/whatever we’re calling them these days only just released on Early Access. 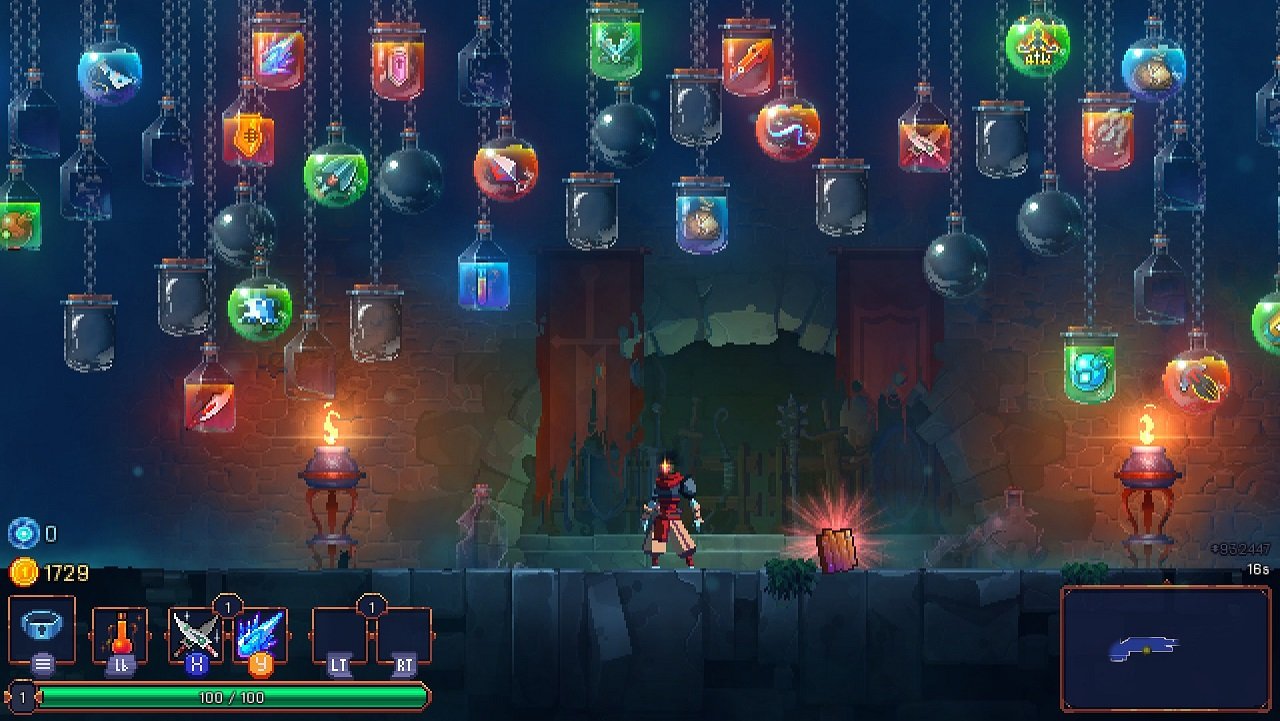 Even though it’s an Early Access title, I have a hard time calling Dead Cells unfinished. It might not be feature complete, but the build I’ve spent a dozen hours with performs like a released product. Early Access games often carry a certain stigma — understandably, people don’t like throwing money at a product that’s little more than a half-baked proof of concept — but Motion Twin’s efforts on Dead Cells make a compelling argument for the program. There are a dozen environments, fifty-some-odd weapons and skills (each with varying power levels), and a handful of enemies, including elite variants and two bosses. From a content standpoint, that’s more than enough to justify its price tag, but it’s how everything comes together — the flow of progress and combat — that elevates Dead Cells even further.

Most of your time is spent navigating the labyrinthian corridors of underground prisons and destroyed castle ramparts. The protagonist, a green blob who’s commandeered a decapitated corpse, cannot die. Every death starts the same cycle over again: fuse with the body, find some weapons, and move through the randomly generated halls of a decaying kingdom. There’s not much by way of a story, but that’s alright, considering that Dead Cells‘ actions speak louder than its vague words.

Like most roguelikes, every run you embark on is different than the last. At first, you’ll start with a short sword and the option of either a bow or shield. When enemies are killed, they drop blueprints and Cells, which are a form of currency used to unlock and upgrade new weapons and skills. As long as the Prisoner can find an exit within a given level, players can exchange their Cells with a mysterious creature called The Collector to earn new loot. After a while, randomized starting gear gets thrown into the mix, adding more fuel the roguelike fire.

But because you can only trade with the Collector after exiting a stage, Dead Cells carries a persistent sense of high-risk, high-reward exploration. You’ll almost always want more Cells, but knowing that one wrong move can mean your defeat makes rushing recklessly into combat dangerous as hell. Even with upgraded strength, increased health, and boosted utility skills — which are earned by finding scrolls scattered throughout levels — it’s all too easy to get whooped by the game’s mix of grotesque zombies and armored knights.

Combat, then, becomes and intricate dance. It’s fast and fluid, but challenging enough that players will have to watch each enemy’s attack pattern. Despite his long-dead body, the Prisoner is a capable fighter in the right hands. Players can double jump, perform aerial attacks, roll past enemies, and switch between their two primary weapons and utility skills to perform powerful combos. If, and when you take damage, landing a few quick strikes earns some of the Prisoner’s health back, further adding to the game’s core focus on risks and rewards. Dead Cells does an exceptional job of making combat look super flashy, with smooth animations to complement its pixel art, while also making each strike feel as though it has weight behind it.

Though a more methodical approach to combat is often safest, it can hurt players in the long run. Each stage is packed with secrets, from carrots squirreled away behind flimsy walls, to Cursed Chests that grant big bonuses at a steep cost. The most alluring of them are time-locked doors. Once players gain control of the Prisoner, a timer starts, counting the seconds until entire routes through the game are locked off. It’s similar to Nuclear Throne‘s hidden paths in that rushing towards them is, well, a rush, but they can often lead you to be woefully underprepared for what awaits. It’s a baked-in difficulty curve that speedrunners and high-level players will get a lot of mileage out of, but there’s plenty of game to see if you play it without racing toward these doors. 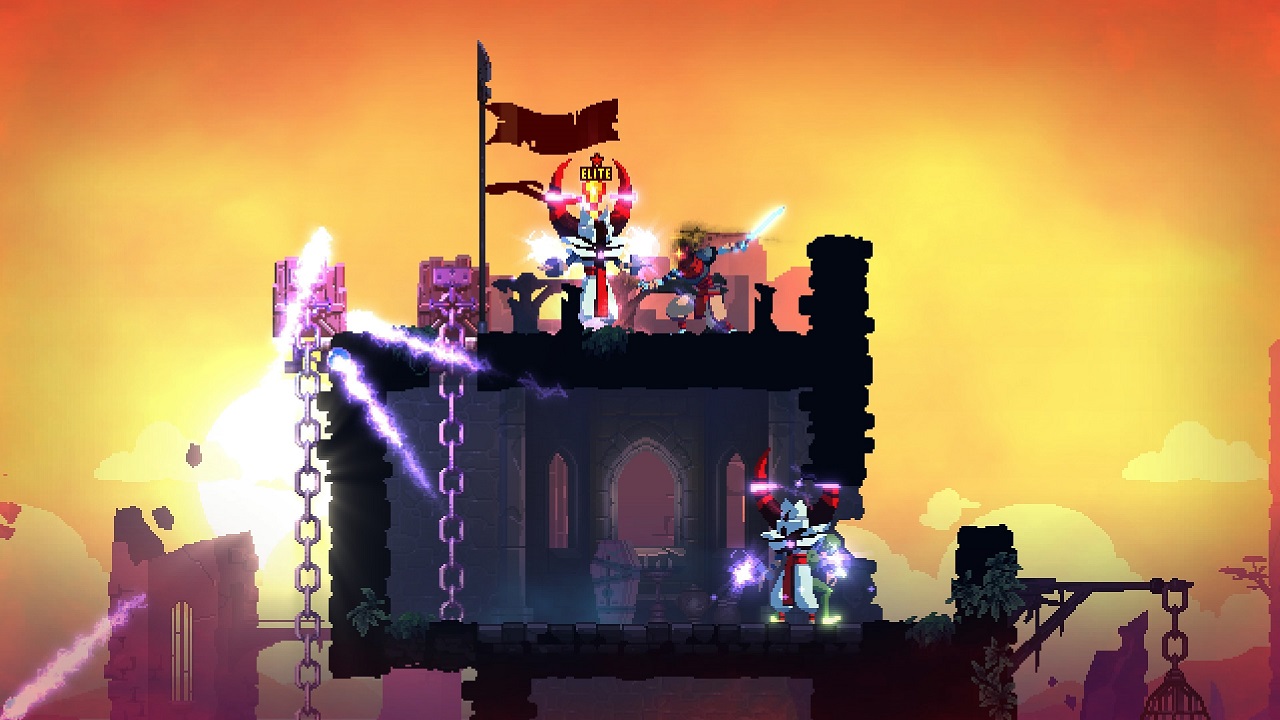 Similarly, the Prisoner can learn useful movement skills that carry over from run to run. Tickling certain objects on the ground causes roots to shoot upward, granting access to otherwise hidden locations. An electric zapping technique functions as a short-range teleport, transporting the Prisoner across short distances that are otherwise inaccessible. These upgrades, combined with the sprawling levels and regular teleporters that litter the environment, build a breezy sense of movement that meshes well with the game’s standard controls. You feel like an undead ninja, basically.

I could go on and on about Dead Cells. Despite the fact that it’s not fully released, it’s already one of my favorite games this year. I’m a sucker for tight platforming and roguelike exploration, both of which Dead Cells has in spades. Much like the Prisoner’s inability to stay dead for good, I’m sure I’ll keep coming back to this game time and time again.

[This Early Access review is based on a retail build of the game provided by the publisher.]