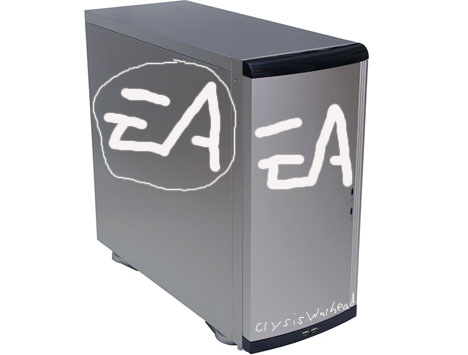 Here’s a bit of news that’s been filed into the “things I wouldn’t expect EA to do until I remembered its EA” folder. According to a rep at the EA Comic-Con booth, the monolithic publisher has now decided to move into the pre-built PC market. This is going to be based around the release of the upcoming “look at me I’m so pretty” PC shooter Crysis Warhead.

It looks like EA is trying to attract gamers that might not know very much about PC components by offering systems that are guaranteed to run Crysis Warhead at each level of graphical detail. There’s no word on whether or not this will be a one time promotion, but seeing as this is EA we’re talking about I honestly wouldn’t be surprised if they started doing this for every single PC game they publish.

And if you already have a decent system that’s running Windows XP Crytek has announced that you won’t be missing out on anything just because you aren’t using DirectX 10. “The former “very high” settings are now called “enthusiast” and this option is now available for DX9, too,” stated Warhead producer Bernd Diemer. “We removed this exclusiveness and thought: If people want to run this on their system, why should we restrict it?”