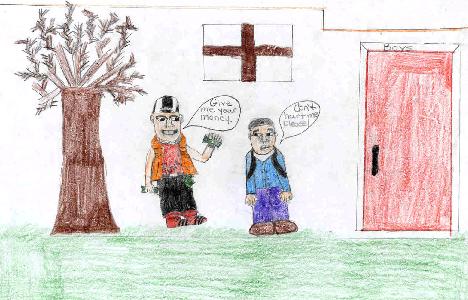 The playground was never a very fun place for me. Between having my fingers stomped on and being thrown in the bushes constantly I never really looked forward to recess. So once Electronic Arts announced today that it will be bringing a game called EA Playground to the Wii and DS I had a fair share of traumatic flashbacks.

To my relief, the new game will focus on what is fun about the playground, mainly things like dodgeball and tetherball, rather than making some of us have to relive the past by playing something called “Crying by the Tire Swing.” Whew.

In an interview with IGN, EA Playground executive producer Dave McCarthy says the game will be very reminiscent of Wii Sports, offering a collection of minigames built from the ground up with the Wii and DS controls in mind. There will even be some games exclusive to each system, as in R.C. car racing on the Wii and spit ball shooting on the DS.

Sounds like it could be a lot of fun, especially if there is a large variety of games to choose from (which, it sounds like, there will be). The graphics look stylized (even more so than Wii Sports) and, honestly, what could be more satisfying than hitting someone in the face with a hard red rubber ball?

Check out the gallery for some first screens and hit the jump for the full McCarthy interview.

IGN Wii: What is EA Playground all about?

Dave McCarthy: EA Playground is all about capturing the sheer fun of being a kid. We’ve designed a dream playground full of interesting characters, cool collectables, and most importantly, a mix of easy to pick up and incredibly fun playground games. There are some classic favorites in there along with some new twists. It’s all packaged together in a meaningful single player “campaign” to play your way through the schoolyard. In addition, there’s also an approachable and fun multiplayer party experience that will appeal to all ages.

IGN Wii: Can you tell us about some of the games in EA Playground and how they utilize the Wii/NDS control schemes?

Dave McCarthy: When we started designing the game we had a ton of good ideas to choose from. After all, kids are incredibly creative when it comes to having fun in a playground setting. We put together our short list based on fun factor, approachability, multiplayer appeal, and the opportunity for control innovation. The cool thing is that we were left with a mix of games representing a range of genres, so there’s always something different to try out in the playground.

On Wii, there’s a mix of games that cover frantic actions mapped to gestures (e.g. throwing and dodging in Dodge Ball) and others that take advantage of navigating the entire world (e.g. RC Car Racing). While set in a similar universe, there are game types exclusive to the NDS version that use stylus mechanics (e.g. Bug Hunt) and even microphone input (e.g. Spit Balls). I won’t get into all the games and mechanics quite yet, but I think it’s safe to say you’ll be entertained with the creative approaches our team has taken to playground games.

Dave McCarthy: I personally think that multiplayer parties are the ideal way to play EA Playground. Whether you do four-player local parties on the Wii or wireless sessions on the DS, you’ll find that all games are multiplayer supported and that frantic simultaneous play is the order of the day. The games are all easy to pick up and play (e.g. remote-only on Wii), along with easy game entry, so it’s the ideal game to crowd around with people of all ages. Just pick your games, specify your “rule set,” choose a character, and track scores in your party session. You’ll also find that as you progress through the single player “campaign” you’ll unlock more games, characters, and environments to play with.

IGN Wii: Does EA Playground revolve around a storyline?

Dave McCarthy: Given that we’ve designed EA Playground for kids of all ages, we wanted to offer a twist to the traditional single-player campaign experience that kids could easily relate to. When I was a kid, I obsessed over my sticker collection and I see that same fascination in my own kids today. So what we’ve done is populated the game with a wide selection of cool looking stickers you can collect based on playing various games, completing special dare challenges, and exploring areas of the playground world. You can customize the look of your sticker book as you triumph through single and multiplayer games, and show it off to all of your friends.