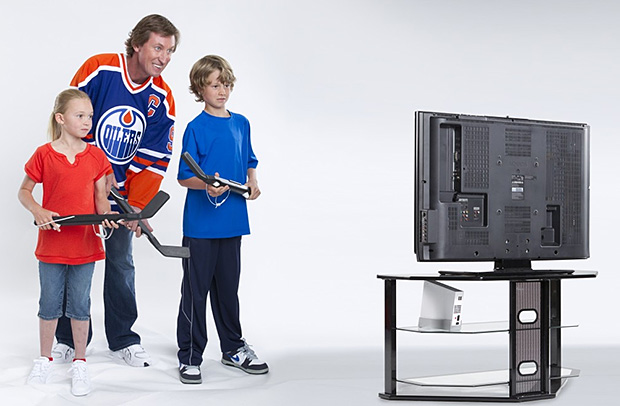 Wii owners who want to play a hockey game haven’t had any option besides the annual releases from 2K Sports’ NHL 2K series — until now. According to Canadian news publisher QMI Agency (and as verified by the Twitter account @EASPORTSNHL), EA is set to announce tomorrow its first-ever foray into hockey on the Wii: NHL Slapshot. Just like last year’s fun PSN/XBLA hockey game, 3 on 3 NHL Arcade, NHL Slapshot is under development at EA Canada by some members of the same team behind EA Sports’ flagship PS3/360 hockey sims, NHL 10 and NHL 11.

EA Sports is pulling out all the stops for this one: they’ve garnered the full promotional endorsement of The Great One, Wayne Gretzky, who will appear on the game’s cover and is also a playable character in the game. (You can see him in the photo above with two of his children, Emma and Tristan.) It’s his first time on a game box since Sony’s 2005 PSP/PS2 game Gretzky NHL 06. In addition, NHL Slapshot will ship with a hockey stick peripheral, the first third-party controller officially approved by Nintendo for inclusion with a game. The 21-inch plastic-and-foam holder for both the Wii Remote and the Nunchuk offers so much precision, EA claims, that the game won’t support Wii MotionPlus because it’s rendered superfluous.

NHL Slapshot will be a waggle-heavy game — the stick detects slap shots, wrist shots, body checks, and poke checks. Players will also have the option of playing with the Wii Remote and Nunchuk sans stick, or even just the Wii Remote alone. The game’s career mode, dubbed “Peewees to Pros,” lets you start out as a 12-year-old kid (either of your own creation, or an NHL star) and take him all the way to the NHL. Creative director David Littman notes, “It actually ends up being the most in-depth Be a Pro Mode that any EA Sports game has ever had, because you go from 12 years old to 40 years old.”

It’s unclear at this point if NHL Slapshot is a full-on simulation, like 2K Sports’ NHL 2K11 (which is exclusive to the Wii), but Gretzky himself certainly seems to think so: “I’ve had a chance to play it, and it’s one of the more realistic games I’ve seen a long time,” he says. Either way, NHL Slapshot is due out on September 7th, the same day that NHL 11 will launch for the PS3 and 360. There’s no word on pricing, but EA Sports Active, which shipped with a leg strap and resistance band, cost $60 — so expect something in that area.