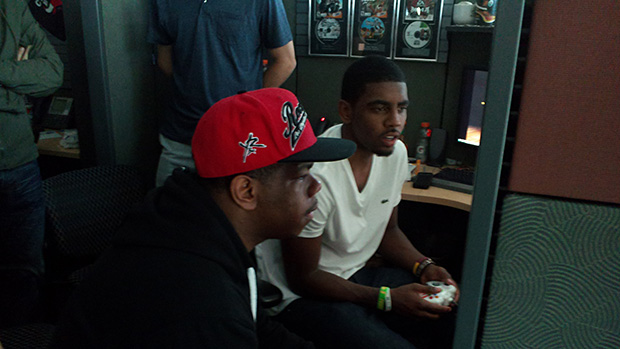 Above is a smartphone photo of Cleveland Cavaliers point guard Kyrie Irving (right) taken a few hours ago. He was playing an early build of the EA Tiburon-developed return of EA Sports’ basketball franchise. EA hadn’t officially announced the game’s title before that photo went out on Twitter, but the main EA Sports account and the EA Sports NBA account have since tweeted photos of Irving playing the game. In addition, EA Sports has confirmed to Kotaku that NBA Live 13, “an all-new experience that captures the future of basketball,” is coming this fall.

A number of NBA players are already in Orlando — home of EA Tiburon — for All-Star Weekend festivities, and Irving’s not the only one who has checked out Live 13. John Wall of the Washington Wizards and the Minnesota Timberwolves’ Ricky Rubio have also stopped by; as Pasta Padre’s Bryan Wiedey pointed out, all three players are young point guards, which could signal an area of focus for the game. If so, there’s a certain Asian-American sensation who’s probably waiting for a call from EA.

Live 13 has been in the works for some time now. It was clear that EA Sports was going to ditch the NBA Elite brand, which reached debacle status back in 2010, although the new name was unknown until today. It might seem strange to return to Live after EA left that name for Elite, but the company likely realized that it could benefit from the extant brand loyalty of the long-running Live series.

After a poor reception to a buggy demo, EA Sports indefinitely delayed NBA Elite 11 just one week ahead of its scheduled release before canceling the game outright a month later. EA also moved the series from EA Canada to EA Tiburon, and announced in April 2011 that the Orlando-based studio — also home to EA’s Madden, NCAA Football, and Tiger Woods PGA Tour franchises — wouldn’t ship a simulation basketball title until 2012.