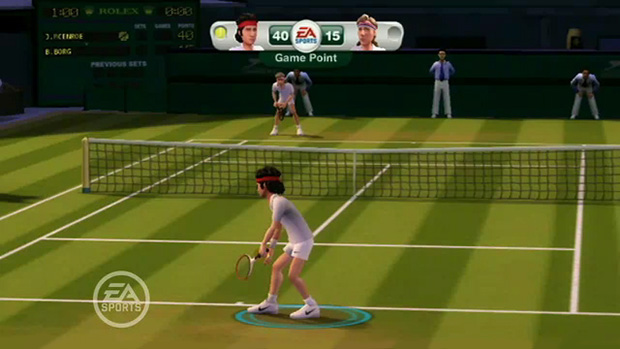 A few weeks ago, we gave you a look at the first screenshots of the inaugural edition of EA Sports’ new tennis franchise, Grand Slam Tennis. In my post, I said that I found the images “impressive” because EA is being smart with the game’s look — since realistic graphics don’t really make sense (or work) on the Wii, Grand Slam Tennis features stylized visuals. That puts the focus on the gameplay instead of the graphics, and that’s never a bad thing.

Now we’ve got two minutes of video from the game, and I remain impressed — the game looks very fluid, the variety in shots is apparent (slices, drop shots, etc.), and I love how the HUD disappears during volleys. It’s also cool to be able to immediately pick out who’s who just from their faces and clothing; the video features Roger Federer, Serena Williams, Maria Sharapova, John McEnroe, and others. I’m now even more excited to see how Grand Slam Tennis turns out — so far, all signs point to a very realistic simulation of the sport.

Check out the video after the jump.