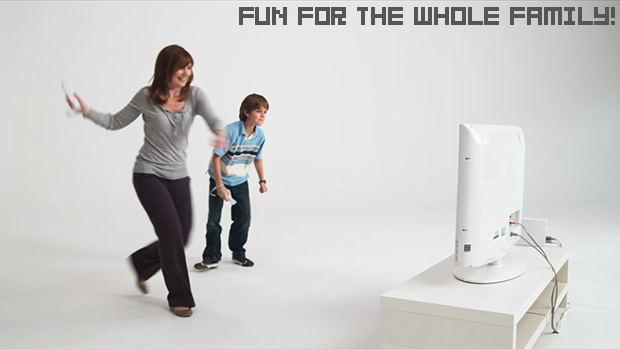 With the Wii, Nintendo has scored a tremendous, undeniable hit; it’s the first videogame console that could arguably be said to appeal to the masses (i.e., not just people who have traditionally been labeled “gamers”). You know this, I know this, and EA Sports knows this — so they’re aggressively marketing their upcoming tennis game, EA Sports Grand Slam Tennis (exclusive to the Wii until this fall), to everybody.

In fact, on April 6th, they brought in a number of people from a variety of demographics — a mother and son, a father and daughter, a young man, and a teenage boy and girl — to film an advertisement for the game with people who, presumably, aren’t your typical gamers. The video after the jump features the seven individuals doing what you’re used to seeing people in commercials for Wii games doing — that is, flailing their arms wildly and getting into the game. But this time, all that stuff makes sense in the context of Grand Slam Tennis, since the Wii Remote, as mom Nancy notes, functions as a real tennis racket in the game.

As I’ve said before, the more I see of Grand Slam Tennis, the more I wish I had a Wii to play it on. It really looks like it’s going to provide an accurate simulation of the sport coupled with a control mechanism that will make you feel like you’re actually on a real tennis court, holding a racket. If you’re so inclined, you can check out some new screenshots and player renders in the gallery below; we’ve also got other gameplay videos here and here, and more images here. Hit up the game’s Web site for even more!

By the way, Nancy, it looks like you and young Mitchell are all alone in this world — and I’m sorry to see that. If you need a man in your life, just give me a call, you know? I look forward to it.