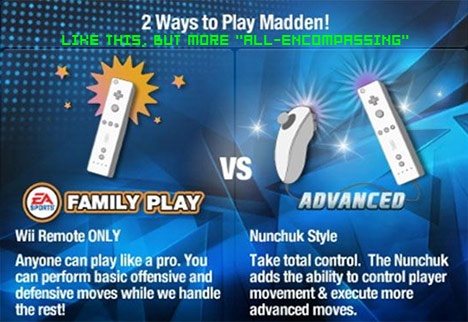 A while back, we told you of how Peter Moore wanted to evolve EA Sports to adapt to the rapidly changing videogame market. Specifically, he referenced the Wii, and noted that most non-gamers are intimidated by all the buttons and complicated controls in most sports games. A couple of weeks ago, EA hosted an event in Vancouver, the first-ever EA SPORTS Season Opener, where they introduced a new program to help remedy the situation and bring more non-gamers into the fold. I’ll let Moore tell you more about it:

We also announced an initiative for the Wii called “All-Play”. We’re designing five of our most popular franchises exclusively for the Wii this year and they’ll feature unique controls, unique modes, unique presentation, and unique packaging. All-Play is a much more all-encompassing design philosophy that expands significantly on last year’s Family Play control scheme in Madden, FIFA and NBA LIVE.

This isn’t surprising at all, what with the news that EA Sports is working on eight Wii games and an as-yet-unannounced IP in addition to FaceBreaker. But in the story about change at EA Sports, I expressed some trepidations that in the rush to cater to “casual” gamers, the “hardcore” crowd was being left behind as an afterthought. Thankfully, Reg Hamlett, Senior Director of Brand Marketing at EA Sports, assures us that we need not fear that:

Hardcore fans are our base and our biggest fans … Their opinions and seal of approval are of extreme importance to us. That said, the All-Play brand is aimed at those consumers who seek to leverage the unique attributes of the Wii and play a sports game that utilizes these unique features.

Glad to hear it, Uncle Reg. Many of you have noted that you might be more drawn in to sports games that feature simpler controls, while others have been worried, like me, about things being dumbed down. It looks like EA is doing their best to please everyone — sounds good, right?

[Via Peter Moore Blog and Wii Fanboy — thanks, Justin!]