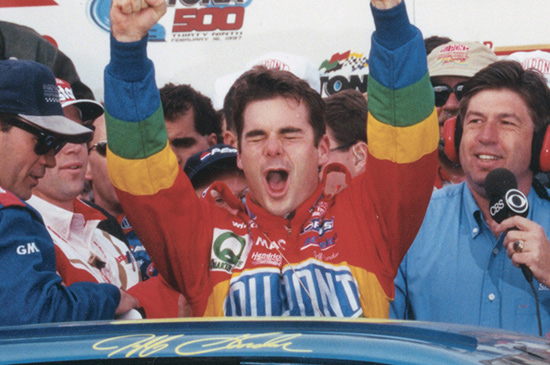 The cover “athlete” for this year’s stock car racing videogame, NASCAR 09, has just been revealed to be Jeff Gordon. Now, is that not one of the most generic names you’ve ever seen? Apparently, this is a pretty popular “sport” in some backwater parts of the United States. Also, this Jeff Gordon character must be kind of a big deal, since this will be his third time on the cover of the franchise.

NASCAR 09 is being developed by EA Tiburon, the same guys who do the Madden games. They’ve put together a completely revamped handling system for NASCAR 09. The idea is to allow novices to get into the game easily, but also to provide enough of a challenge for experienced enthusiasts.

Another major addition will be the new career mode, “Sprint for the Cup”. Gordon will act as an in-game mentor and guide to help you on your way to becoming the NASCAR Sprint Cup Series champion. For more details, check out the press release after the jump. Okay, I’ll level with you — there isn’t much else of substance there.

EA has provided three screenshots for your viewing pleasure (scroll down), although the cover artwork itself is nowhere to be found. NASCAR 09 will be out in North America on June 10th for the PS3, Xbox 360, and PS2.

One of NASCAR’s most celebrated and successful drivers for more than a decade, Gordon is ranked 6th all time in Cup Series wins with 81 and is a four-time Sprint Cup Series champion. Gordon is a member and partial owner of Hendrick Motorsports.

“It’s exciting being on the cover of NASCAR 09,” says Gordon. “The game is as real as it gets and it’s been great being involved with it on this level. I look forward to helping gamers in NASCAR 09.”

Gordon’s prestigious reputation aligns with the new NASCAR 09 career mode, “Sprint for the Cup.” Gordon will bring the game to you as a guide and a mentor to help you build your reputation to become the next NASCAR Sprint Cup Series champion. With a completely rebuilt handling model, the game will be more accessible to newcomers while continuing to offer options that will challenge even the most experienced virtual driver. NASCAR 09 is an authentic NASCAR experience that will appeal to every type of NASCAR enthusiast.