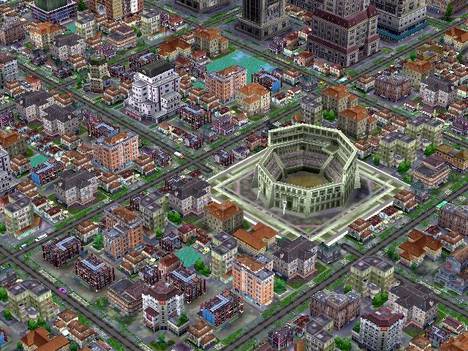 Like with Monopoly earlier, what’s there to say about SimCity that you don’t already know? It’s a timeless classic that nearly everyone has experienced in some form. The SimCity series holds a special place in my heart as it was a key part in the development of my love for videogames (SimCity 2000 ftw). The concept remains the same with the Wii version, but there are a few new additions.

SimCity Creator will also have Hero Buildings such as the Roman Colosseum and Vegas Tower. Put down a Colosseum in a neighborhood and every building near it will start to transform and adopt a Roman style design.

At any point in the game, you can jump in a plane and navigate your town while you steer your plane with the Wiimote. You’ll also be given missions that you’ll have to do in the plane such as search and rescue missions and obstacle courses. Complete these missions and you’ll be rewarded with special buildings.

And of course, what would a SimCity title be without disasters. There’s a ton of disasters and most will require the waggle powers of the Wiimote. Summon tornadoes and you’ll need to spin the Wiimote around. Giant Drills, the hand of God, giant boomerangs, monsters, robot invaders and plenty more will all be at your disposal for when you’re feeling emo but are too afraid to hurting yourself physically.

I didn’t see the DS version, but was told that you’ll be buidling up your city starting from the Stonge Age all the way to the future in a Civilization kind of way. Expect SimCity Creator to come later this year for the Wii and DS.