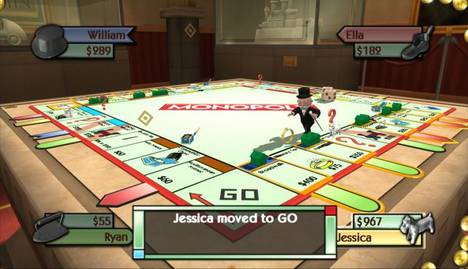 EA has partnered up with Hasbro to bring the Hasbro board and toy line to videogame consoles. One of the major deals from this partnership is seeing the ever popular Monopoly game come to the Wii, PS2, and Xbox 360 this October.

The classic Monopoly you all know and love will of course remain intact along with additional boards and themes to help spice things up. Brand new boards will include a futuristic board, cardboard board, jungle board, cheese board and more. All of the pieces will change to reflect the theme (such as origami movers on the cardboard board) and even Mr. Monopoly’s clothes will reflect the current board theme.

Speaking of which, Mr. Monopoly will be on the board to help and guide the players giving helpful suggestions. This Monopoly is also using the long lost rule of Monopoly, where if a player doesn’t purchase a property they land on, the property will then go up for auction and players will have to out bid each other if they want a particular property.

There will also be a speed mode broken up with mini-games, Mario Party style. Players will be given random property based on dice rolls and after each player receives their property, players will be taken to a mini-game that will help determine how successful they are in the next round.

What else is there to say? It’s the Monopoly you all know and love except without all the annoying stuff like setting up, cleaning up, and worrying about people cheating. Monopoly will be $29.99 for the PS2 and $39.99 for the Xbox 360 and Wii.