I saw nearly 30 games at the EA Showcase at EA Studios in Redwood Shores yesterday. After getting hands-on time with, or at least seeing, everything EA had to offer, I came to one simple conclusion: Henry Hatsworth in the Puzzling Adventure was the best game of the show to me.

Wait a second; I actually liked a casual game over something like Mercenaries 2 (which was at the EA Showcase and a preview will be coming) or any of the other hardcore games? Why yes, I actually think Henry Hatsworth is absolutely brilliant. Hit the jump to find out all about this fun little game.

Henry Hatsworth has found a magical hat that grants him super powers. Henry is a responsible gentleman, though, and he wants to return the hat, as well as the rest of the super-powered suit pieces scattered across the world, back to their rightful place. Others have different ideas, though, and they want to use the hat and suit for their own evil greedy deeds.

On the top screen, Henry goes through various levels slashing and shooting his way through all kinds of enemies. As you kill enemies, they will fall to the bottom screen, becoming puzzle pieces. The puzzle pieces will slowly rise up, and unlike most puzzle games, you won’t lose if the puzzle pieces get too high. Instead, they will start to appear on the top screen and enemies will then come back and attack you all over again.

You’ll have to maintain the puzzle section as you go through, and it is totally not a chore having to maintain the bottom screen. By pressing X on the DS, the focus will switch over to the touch screen, while the action on top is paused. Killing enemy blocks will feed your special meter, which is located on the right side of the bottom screen. Furthermore, if you have a projectile like a bomb or laser blast paused on the top screen, clearing blocks will increase the strength of the bomb and laser blast. You can only clear puzzles horizontally, which is a good thing, as it would be way too easy if you could solve them in more than just one way.

There’s a meter on the left-hand side of the touch screen that drains the longer you stay in the puzzle section. It will increase as you kill enemies and clear puzzles, but you won’t be able to stay there forever. As you clear enemy blocks, the special meter on the right hand side fills up, allowing for you to use one of Henry’s specials, which transforms him into a younger version of himself. While in this special mode, attacks won’t hurt as much and your attacks will become stronger. 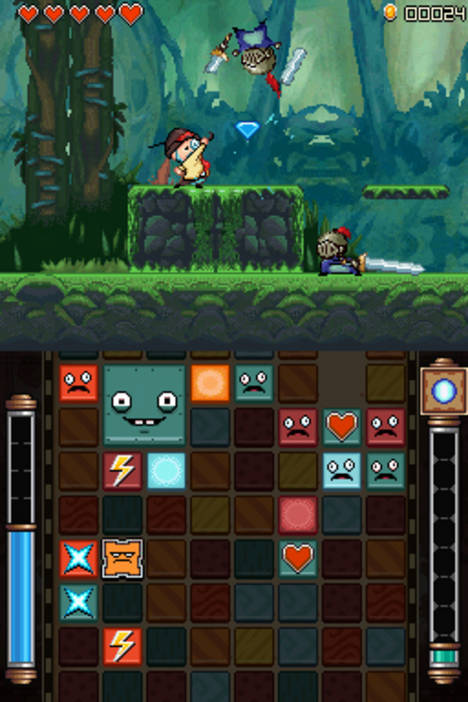 Fill up the meter all the way and it’s Tea Time! Henry will get into a giant robot Mech Suit and have absolutely insane weapons, such as being able to shoot unlimited amounts of missiles out of his chest, shoot dozens of lasers from all over his body, to much more. You will be completely invincible while in the suit, and it lasts until your Super Meter runs dry. Clearing puzzles will add more fuel to your Super Meter, letting you keep the Mech Suit longer, but it will eventually deplete and your Mech Suit will disappear. In a way, this power-up is similar to Mario’s Super Mushroom power-up from New Super Mario Bros., except much more awesome.

Right before getting my hands-on, I was shown one of the first boss fights against a man named Lance. He’s an opera singer who will do some sexy poses to heal himself, and you can use a special attack on this boss that will send some crazy fans on stage to trample poor Lance.

Overall, the game plays great. I love the extreme absurdity of it all and the blending of action and puzzles is done perfectly. The puzzle action can be controlled either by buttons or the touch screen, and the only real main touch-screen action required is the activation of Tea Time.

Also, it’s odd that this is in the EA Casual label. There is a lot of depth to this game and I feel like the casual label could actually hurt this game’s chances of reaching the right audiences. Henry Hatsworth in the Puzzling Adventure will be out early next year.