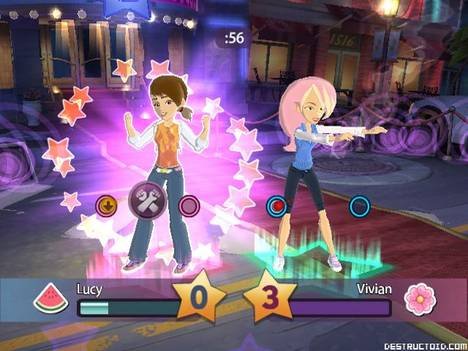 Among the slew of titles Electronic Arts decided to show the press at yesterday’s showcase was Boogie Superstar for the Wii, the upcoming girl-centric follow up to last year’s Boogie. The game features dancing, singing, and — let’s be reasonable — is not exactly directed at our demographic.

So it’s a good thing we snuck in with our tween correspondent, 12-year-old Taylor Tiffany. This was her first assignment, and she was not on EA’s guest list, despite the fact the we very clearly RSVPed for her. A bit nervous at first, Taylor really came out of her shell after a couple of drinks and EA presented Boogie Superstar.

Hit the jump for her full report.

About Boogie Superstar by Taylor Tiffany

1st of all, OMG! This is my 1st asignment with Destrucktoid and I M it was very xciting at my 1st industry event! I really luv video games like the Nintendo Wii and Wii Sports so I knew I would be a good fit and I M glad they gave me the chance!

OKAY so, Boogie Superstar is a new game being made by EA Montreal which I think is in Canada a place I dont want 2 go becuz I hear its cold and I have so many cute skirts i wouldnt be able 2 wear ! LOL! The producer, Charles-William Bibaud (FUNNY NAME!), talked 2 us and he had a really cute but hard to undrstand accent. Evry time he said “boogie” it sounded like “boobie” so I blushed when  I thought he said that “boobie is going to empower the tween girl audience.” LOL.

Boogie Superstar is a game where you sing and dance to like the most awesome music of our generation like Katie Perry’s “Hot and Cold.” OMG KATY IS SO PRETTY ISNT SHE? NEWAYZ …… also the game has a song by my husband joel maddens band Good Charlotte. TAYLOR <3s JOEL. LOL. 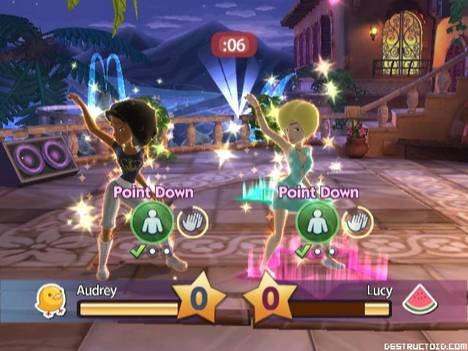 two gurlz came out and they showed us how to play. There names were Allegra and Kate, which I think are really pretty names but Allegra kinda sounds like a name u would give 2 a pony or something right?

So they danced around with the Wii Remotes and the little stick on a wire and what they did on the stage also happens in the game which is probably the coolest thing like just about EVER. U have 2 keep 2 the beat though which could B hard but they help you by putting one of those little clicky things in the game 2 help u out. [Editor’s note: Taylor is referring to a metronome. -Nick]

The guy who kept saying “boobie” told us that u could get more dance moves and stuff and also earn new accessories to dress up your character in the game.