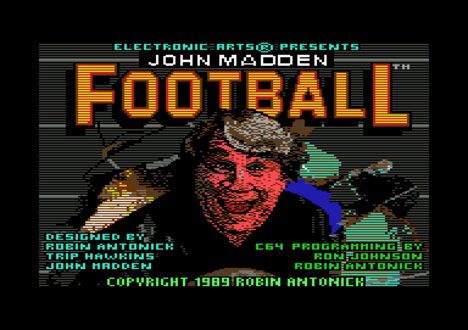 Never one to shy away from shameless self promotion, the hard-working folks at Electronic Arts have proclaimed that their golden goose, Madden, was the best selling game of 2006. This is proof, that once again, the power of the so-called Madden-ites is a strong force that will never go away. The news:

Major publisher and developer Electronic Arts has announced that that Madden NFL 07 has sold more than five million copies across a total of ten different console and handheld platforms.

First released on August 22, the game set records by selling an estimated 2 million copies in its first week at retail, a figure that placed the game’s sales up 12 percent from sales of last year’s release, which saw sales of 1.8 million units over the same general period.

Following today’s news, EA has now proclaimed the multiplatform sports title, which is available for the Xbox 360, Xbox, PlayStation 2, PlayStation 3, Wii, GameCube, PC, Nintendo DS and PSP, to be “North America’s most popular game of 2006”, based on both internal sales data as well as industry sources.

There you have it. Mediocrity 100, great games 0. We all lose in this one.

Filed under... #Does it suck?#Madden