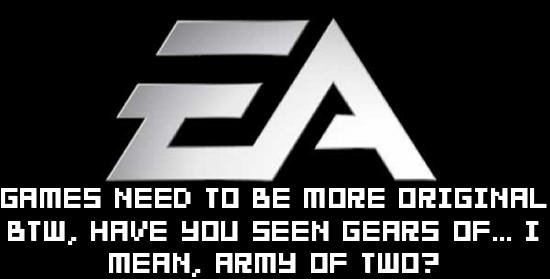 The CEO of Electronic Arts, John Riccitiello, has condemned the games industry’s reliance on sequels and a “rinse-and-repeat” mentality, making perhaps one of the most ironic statements of the year. EA is, of course, the king of repetition and sequels that make only minor updates, something the company has become incredibly well known for. “There’s been lots of product that looked like last year’s product, that looked a lot like the year before,” Riccitiello said, failing to include that EA was likely responsible for a vast percentage of them. “We’re boring people to death and making games that are harder and harder to play.”

Despite the almost hypocritical nature of Riccitiello’s comments, I do find myself agreeing with him. While sequels to great games are always welcome, it’s no secret that originality and risky new ventures are not in abundance. With EA committing itself to so-called ‘casual’ games and the Wii in particular, it’s not surprising that the company would want to come across as the new standard bearer for innovation, but it will take more than Boogie to convince me of its dreamy ideals.

As I have admitted, EA’s CEO makes a very fair point about the state of the market, but a huge reason why we’re in the situation we’re in isn’t the industry’s fault. I’d venture to say that a hefty portion of the responsibility lies with the consumers, perhaps more than anything else. There’s always pressure to produce a sequel to a popular game, and fans often want more of the same, threatening death to those who deviate from the beaten track. When a new, totally original game does make it to retail, the low sales figures often tell the story, while a slew of sports titles and movie licences easily shoot into the top sale slots. In this world of supply-and-demand, it’s the customer who is often more at fault than the producer who is, after all, just giving the public what it wants. Is it any wonder that the industry is scared to try new things when most of the time, it’s simply not rewarded for it?

[Burling tipped us, though I found it first. Burling’s awesome and deserves to be credited anyway]