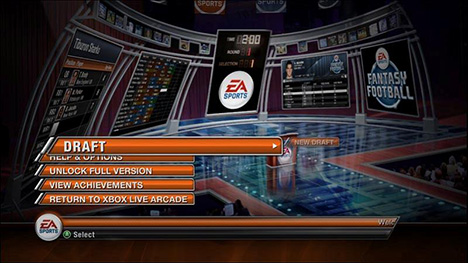 How many of you play in fantasy football leagues every fall? Well, probably not that many, since this is Destructoid, after all. But think of the thousands — nay, millions — of people across the nation who participate in office pools and “roto” leagues every year. Now think of how many of those people own a PlayStation 3 or an Xbox 360. That’s a pretty sizable area of convergence there on your mental Venn diagram, isn’t it?

It was only a matter of time before someone attempted to capitalize on that, and EA has put together an impressive-sounding package to do so. They’ve launched a new Web site, fantasy.EASPORTS.com, where you can play fantasy football. It sounds like your average, standard-fare Internet fantasy football league — there are endless other sites where you can do the same thing.

Each of the apps offers some very cool features to help manage your league more easily — see the press release after the jump and the attached screenshots for more details — but what really impressed me is EA SPORTS Fantasy Football’s integration with Madden NFL 09. Have you ever wanted to actually play with your stacked fantasy team in a videogame? Well, you’ll be able to do that this year. The team will serve as a fully-functional created team, so it’ll be playable in all areas that normal created teams have access to (yes, that includes online multiplayer!).

So how many of you are now chomping at the bit for Madden 09 and these apps?

If you’ve ever wanted to test your fantasy team against others in the Madden NFL franchise, EA SPORTS Fantasy Football now gives you the opportunity. Through the website, players designate which fantasy team will be imported into Madden NFL 09. This fantasy team is a fully-functional created team and can be played in all areas available to created teams, including online head-to-head games, providing the ultimate football gaming experience.

EA SPORTS Fantasy Football is an officially licensed product of NFL PLAYERS, the licensing and marketing subsidiary of the NFL Players Association.