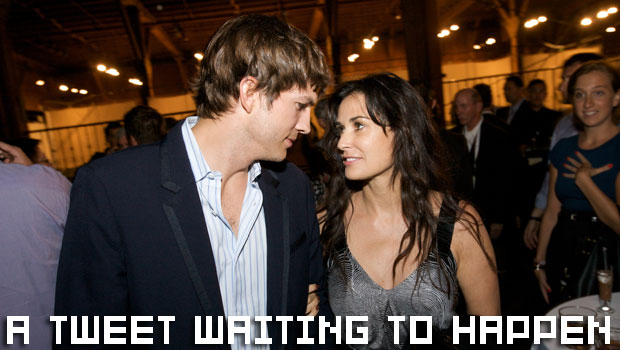 So where do I start with this bizarre little piece… you know Ashton Kutcher? The actor and dude who swept Demi Moore off her feet, right out from under you? Right. So that guy has a Twitter account, which he’s actually pretty active on. Kutcher is hip to the social media, as the kids would say.

OK, so if you haven’t shouted “what the f**k?” at your computer screen yet, here’s the part more relevant to your interests. Electronic Arts has said that it will give his 1,000,000th follower a copy of every game EA makes in 2009 for their system of choice, and will put them in The Sims 3.

Yes. All of this is a thing that is happening.

We’re currently not following Ashton on Twitter. Not because we wouldn’t enjoy him talking about making up his stepchildren’s Easter baskets, or because we wouldn’t find his Twitter exploits with his wife Demi Moore fascinating. We totally would. But we kind of want to wait it out, because we could use these EA games. We really want to make sure we get review copies of Dante’s Inferno.