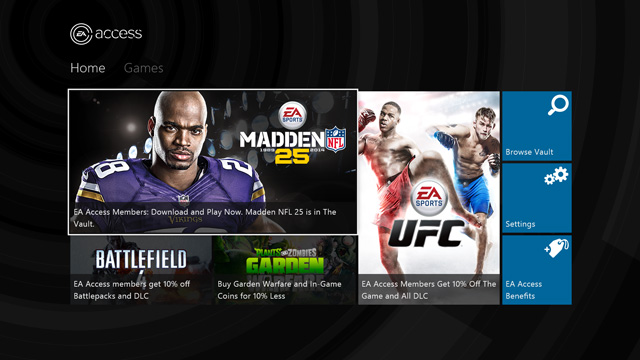 PlayStation Plus, Games with Gold, and now EA Access. Electronic Arts has announced a new Xbox One-exclusive subscription-based service ($4.99 per month, or $29.99 annually) that gives its members access to The Vault, “a collection of EA’s biggest games on Xbox One ready for you to download and play.” Memberships also include a 10 percent discount on purchases of EA digital content on Xbox One (DLC and full games), plus early access to demos.

This program is available as of today in a beta capacity and will see a wide release soon.

For the EA Access beta, the four Vault games are Battlefield 4, Peggle 2, FIFA 14, and Madden NFL 25. A decent initial offering, but we’ll have to wait and see if this program remains a decent value long term. If new games are added not long after release, this could be a good deal for a certain type of player — folks who go for the yearly sports titles, for instance.

It’s curious how this is only offered on Xbox One.