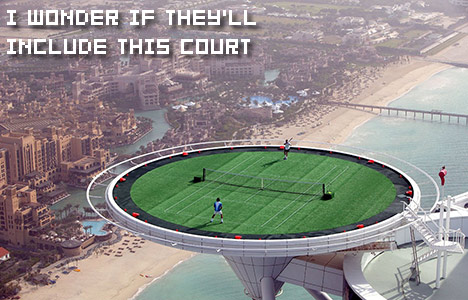 I figured it was only a matter of time before EA Sports started a tennis franchise. Hell, I always wondered why they hadn’t yet done so — in fact, as far as I’m aware, EA Sports has never made a tennis videogame. They’ve got franchises for sports ranging from cricket to rugby, so why not tennis, which is an immensely popular sport around the world (and, more importantly, one that the North American market actually gives a damn about)?

Indeed, it was only a matter of time — today, Peter Moore announced that EA Canada is currently working on a new tennis videogame. It doesn’t have an official name yet — Moore just called it “EA Sports Tennis” for the purposes of the announcement — but what we do know is that it won’t be out until late 2009. Actually, the press release (viewable after the jump) says “2009,” but if you go to the game’s Web site, you’ll see that it says the following: “EA Sports™ Tennis will be available late 2009 for the Wii™ and next generation consoles” (so, presumably, the PS3 and 360 as well).

Details are scarce on this brand-new title, but we do know that it’s going to be released on the Wii before any other platforms — and it’s going to feature support for the upcoming Wii Remote add-on, the Wii MotionPlus (it’ll be the first EA Sports game to do so). I have high hopes for the game since it’s under development at EA Canada, the Vancouver studio behind last year’s brilliant NHL 08 and the next iteration of the series, NHL 09, which looks amazing.

Finally, it wouldn’t be an EA Sports game without some sort of exclusivity, right? The press release mentions that the videogame will be the only one to feature the All-England Lawn Tennis Club (i.e., the court where Wimbledon is held), so that’s definitely cool — I think Top Spin 3 just substituted it with an arena called the “London Tennis Center” or something like that. Either way, I’m excited about the prospect of a new entrant into the fray of tennis videogames. Hopefully, EA Canada does the sport justice.

ANYONE FOR TENNIS? EA ANNOUNCES TENNIS FRANCHISE IN DEVELOPMENT

REDWOOD CITY, Calif. – August 20, 2008 – Electronic Arts Inc. (Nasdaq: ERTS) announced today that an all-new tennis videogame is in development at EA Canada in Vancouver under the EA SPORTS™ brand. The EA SPORTS tennis franchise will be available first for the Wii™ in 2009, followed by other platforms, and it will be the first EA SPORTS game that uses Nintendo’s upcoming Wii MotionPlus™ accessory for the Wii Remote™ that will give players a new level of accuracy and responsiveness.

“As we look to expand the EA SPORTS brand and captivate sports fans from around the world with rich new interactive experiences, it was obvious that the renaissance we’re seeing in the sport of tennis provides us with a big opportunity,” said Peter Moore, President, EA SPORTS. “Our new tennis franchise, coming first to the Wii, will put fans right into the action and provide the excitement, tension and drama that true champions feel in legendary matches – like the classic from Wimbledon just last month.”

EA SPORTS will bring tennis to life and allow players to experience the pressure and excitement of competing in the greatest theaters in the game, and it will be the only videogame to feature the All England Lawn Tennis Club – home of The Championships, Wimbledon. The all-new EA SPORTS tennis franchise will offer innovative ways to play, both as or against the greatest players from the past or present, letting you control the ball and work the court like you never have before in a tennis videogame.

For more information, please visit www.easports.com/tennis. The game has not yet been rated by the ESRB or PEGI.