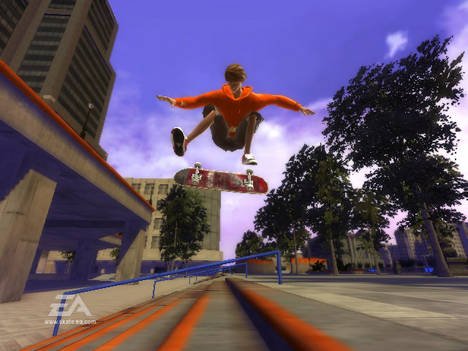 This really isn’t a huge surprise, since IGN accidentally barfed up the news last month, but Electronic Arts have officially announced that they will be bringing their Skate franchise to the Wii and Nintendo DS.

Called Skate It, both versions are set to ship in 2008. Much to the delight of everyone, I’m sure, the Wii version of Skate It will support the Wii Balance Board, as well as the expected flicks and twists with the Wii remote. The DS version will use the stylus, likely mirroring the “FlickIt” controls found on the PlayStation 3 and Xbox 360 versions of Skate.

Also tucked in the Skate It press release was the fact that Skate 2 is currently in development. Not exactly a megaton revelation, since the first game trampled all over the sales of Activision’s long-standing king, Tony Hawk.

Now what exactly is this “it” EA are talking about … ?

REDWOOD CITY, Calif. – May 12, 2008 – Electronic Arts Inc. (NASDAQ: ERTS) today announced Skate It, a new game in the awardwinning Skate franchise that taps into the heart and soul of being on a skateboard. Designed exclusively for the Wii™ and Nintendo DS™ systems, Skate It has Nintendo players riding with the skate pros, owning the best spots in San Vanelona and pulling off the sickest tricks using the popular FlickIt controls. Loaded with allnew gameplay features, Skate It breaks new ground by introducing innovative support for the Wii Balance Board which gives players a fresh way to create their own signature skateboarding style.

“We knew it would be an exciting challenge to bring the soul and feel of skateboarding to the Wii and Nintendo DS,” said Scott Blackwood, Executive Producer Skate
franchise. “With fresh new
designs and gameplay components built from scratch, we’ve been able to, once again, capture the true experience of skateboarding in a completely innovative way.”

Skate It unleashes the FlickIt revolution on to the Nintendo platforms, letting gamers use the Wii remote or the Nintendo DS stylus to string together their best tricks for the ultimate skate line. The Wii remote becomes a skateboard and reacts to gestures that mirror actual skate flips and moves. Players can also deepen this experience by planting their feet on the Wii Balance Board. Skate It brings the hit Skate franchise to a new level of creative ingenuity and gameplay excellence.