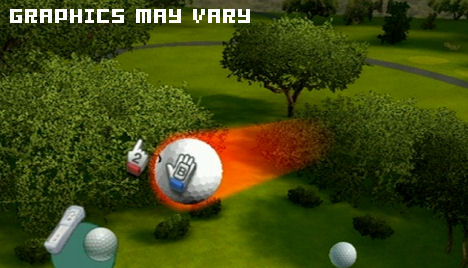 The Advertising Standards Authority has been an annoying thorn in the side of the videogame industry for a while, having posters and commercials pulled, often for silly reasons. The ASA might be right this time, however, pulling a TV commercial for Electronic Arts’ Tiger Woods PGA Tour 09, which can no longer be shown in its current form.

The basis of the complaint is the fact that, despite sporting a Wii logo at the end of the advert, EA has (naturally) chosen to use footage from the Xbox 360 version of the game. The commercial states that the game is available on all formats, but carries a Wii logo. One busybody has complained to the ASA, stating that the footage is “misleading” to Wii owners.

The fact that Tiger Woods is shown swinging a Wiimote to match gestures on the Xbox 360 version isn’t misleading at all, of course.

Everybody knows that no sane publisher would post Wii footage if they have superior footage from another system, since most Wii games look like rubbish. EA put it even more bluntly, defending itself by saying that the Wii version was simply not of “broadcast quality.” Ouch.

Of course, if you own a Wii, you should already be prepared for a game that looks ugly as sin, comparitively speaking. However, the fact that EA showed a Wiimote but not any Wii footage at all is totally false advertising. A lot of stupid people could be suckered in by that and while, technically, it would be their fault for suddenly expecting HD graphics on their white waggle box, the ASA seems to have made a sensible decision. For once.