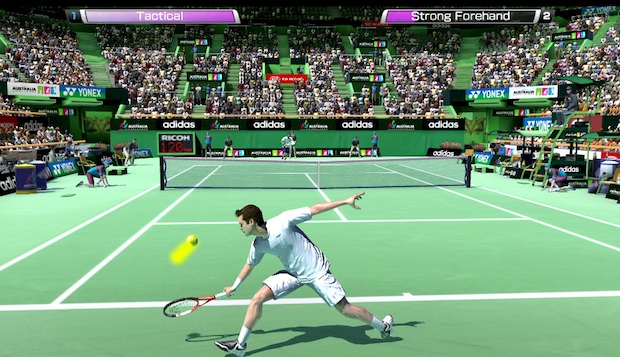 Sega’s demo for the Vita version of Virtua Tennis 4 wasn’t very long, but it did a good job of showing off two key points. The first is that it is very nice looking, with high-resolution graphics that hold up to any console version of the game. The other is that the game supports touchscreen controls. While the standard button controls can be used, you have the option of using the touchscreen at any time.

In the demo I found I was able to touch the ground to have my player move to that area. To swing, I only had to flick the screen in the direction I wanted to swing. A fast forward flick was a regular swing. Pulling back a bit and then quickly flicking forward was more of a lob. It sounds a big gimmicky, but it worked perfectly, and felt quite intuitive.

The final game, which is scheduled to launch some time near the hardware launch, will have 22 players and over 30 courses. Some of them are classic courses, but I was told to expect fun ones that touch on the past, complete with grain filters. It was teased that other courses are set in the near future. Future tennis?

Other Vita features will be supported. The front-facing camera can be used to capture a player’s face to be put into the game as a character. The touchscreen’s multitouch can also be used in a two-player simplified game of tennis. I’m sure we’ll hear more about Virtua Tennis 4’s features closer to the Vita’s launch.