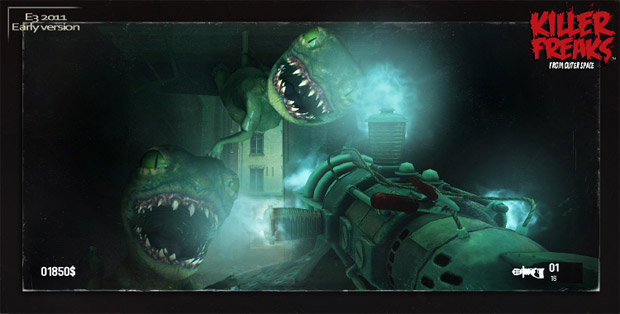 At Nintendo’s developer roundtable this evening, Ubisoft announced a new game for Wii U by the name of Killer Freaks From Outer Space, currently scheduled for 2012. I know what you’re thinking based on the name, but it actually seems potentially cool, at least in terms of subject matter.

Earth has been invaded by flesh-eating freaks, so it’s up to you to stop them, obviously. Nick was at the event, and described Killer Freaks as looking dark visually but having a silly vibe — like a PG-13 horror movie that almost goes too far.

Since it is the Wii U, the gyroscope and accelerometer in the new controller are used. So, your on-screen gun responds to controller movement, etc. Check out the official website for the first screenshots and a teaser trailer. Consider me pleasantly surprised.