Nobody foresaw the success of Magicka, least of all its humble creators. While Magicka did a lot of creative things mechanically, it was the quirky world and humorous presentation that won people over.

While developer Arrowhead Game Studios is going in the polar opposite direction mechanically, The Showdown Effect still embodies their offbeat, comedic sensibilities.

Polar opposite, meaning: Competitive online shooter. Don’t worry. Arrowhead isn’t chasing after that Call of Duty or Gears of War cash, however. Instead, The Showdown Effect is an old-school, side-scrolling shooter.

Think Abuse or Shadow Complex, except with a bunch of other players shooting back at you and it all streaming live to Twitch.TV. One of the cooler aspects of the game is a set of OnLive-esque features, where you can view your friends’ games as they play them. This is all completely optional, of course, but it’s pretty neat to see implemented. 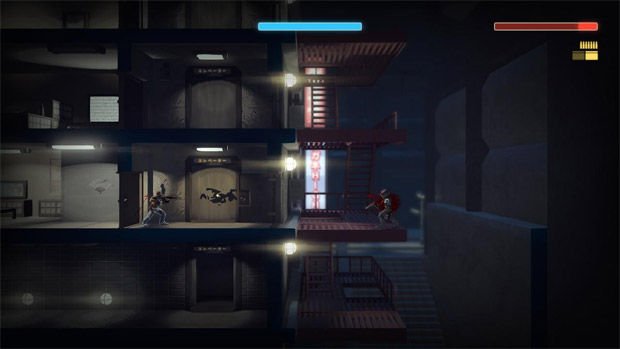 The Showdown Effect is kind of like Deadliest Warrior if the warriors were from B-rate, ’80s action flicks. Each team of four players chooses their character from a roster that includes a Russian boxer, a medieval knight, and a disillusioned cop, among other choices.

Each character has their own style. Some may zip around areas and beat enemies with a pool cue, while another may fire a machinegun from afar. The arenas, including a futuristic Tokyo cityscape and a medieval castle, are also a collection of cheesy stereotypes injected with a sense of humor.

Arrowhead may be biting off more than they can chew with this game. As charming and addictive as Magicka was, balancing a competitive shooter is an entirely different kind of beast. We’ll find out whether they can bring some crafty to the comedy when the beta launches this summer